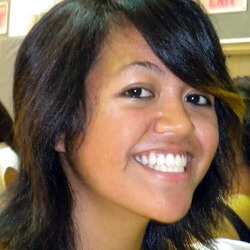 Antoinette Ochoa
Antoinette Ochoa, 20 Loyola Marymount University, English with a minor in sociology Pacific Crest Color Guard, 2008-2009 How did you choose your corps? My band director suggested I try Pacific Crest. One of our percussion instructors at the time marched with the corps a few years prior and told me it was a great place. Since the corps was only an hour south of my hometown, it was an easy drive. I loved the experience after my rookie season and decided to stay. In your experience, what's the best way to prepare for an audition? The most important thing for me is to stay relaxed and remember to give the audition everything I've got. In 2007, I remember being in my front yard the morning of the audition and I was really nervous. I had already practiced during the week but wanted to take a few more sabre tosses before heading over. A little stressed, I tossed a very lofty quad and the sabre hilt came down and smacked my left wrist. There was a bruise and it was swollen the rest of the weekend. In 2008, I remembered to relax and to trust myself. I realized that I had over-stressed myself the year before and told myself to stay calm, to relax and to have fun. The pressures of the audition process didn't faze me as much and I felt that I did better in '08 than I did in '07. What can a prospective corps member expect when he/she shows up for an audition weekend? Honestly, a prospective member can expect the audition process to be a little intimidating. During my first audition weekend I felt like I was around people who were so much better than me, and I felt like I couldn't do it. I kept on pressing and working hard, and I learned so much. People often say that you learn something new every day, and at the auditions, you will learn a whole bunch of things in only a weekend. Staying in a composed mindset, breathing to keep calm, and giving my all was how I got through the weekend successfully. A prospective member can also expect to meet many different people from all over the state, out of state and even out the country. Expect to have a lot fun at the audition. There's nothing like being surrounded by a hundred people who not only understand HOW to do what you do in a drum corps, but who also completely and fully understand WHY you love to do it. The first time you auditioned, was the process different from what you expected it to be? Yes, the audition process was a little overwhelming for me. My high school color guard wasn't very big, so we had the luxury of learning choreography at a slow pace in a more personal setting. That first weekend with Pacific Crest was the fastest that I had ever seen someone teach choreography. There were rifle and flag tosses that I had never done before, and the technique was different than I had previously learned in my high school program which threw me off. I knew that it wasn't going to be easy and that it would challenge me, but I was definitely a little more scared and nervous than I thought I would be. Were you nervous at your audition? I was probably more nervous for my first audition than waiting for college acceptance letters. I didn't know how to relax before that weekend, but I kept telling myself that as long as I didn't give up and kept pushing through all of the challenges, then I would have no regrets. Once I had that positive mindset, the rest of the weekend was still a little scary but my nerves were easier to control. What do you think is most important for someone to take away from the audition experience? I think the most important thing for you to take away is everything that you'll learn. Pacific Crest had a completely different flag technique than I had learned in high school and it confused me at first. But after I learned the new skills, I then knew how to do the same exercises two different ways and that was helpful. Every piece of information that you are given during the audition weekend can be applied to other programs. Any other advice? Even if you're not sure if you will be able to march with a corps this summer or if you can't make up your mind, just go for it. You really have nothing to lose. It'll be another weekend that you're able to do something you already love just in a different environment. It might be intimidating because it's different, but that's also what makes it so exciting. Learn more about corps audition dates, locations and additional info.