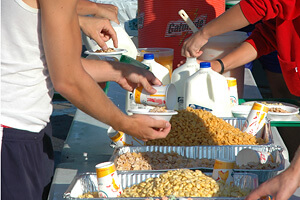 Breakfast of Champions: Members of World Class corps will
consume some 150,000 bowls of cereal in one summer.
17,500 gallons of milk. 20,000 pounds of peanut butter. 150,000 bowls of cereal. These are just some of the quantities World Class corps collectively devour each summer, amounting to some 1.2 million meals served at a price tag around $850 a day. But what if corps could cut down food costs by 20, 30, or even 50 percent? A collective of corps this summer is doing just that. During the off-season, Drum Corps International and several corps laid the groundwork for the Food Purchasing Program, a plan to negotiate lower prices with food distributors by buying in bulk. Now, the first steps are in motion: While corps are on the road, DCI is helping to deliver shipments of cereal, peanut butter and mixed flour products to 12 World Class corps at select show sites. "It only makes sense. We all do the same things, we all buy the same things, why not take advantage of those increased purchases to negotiate a better price?" said Fred Morrison, executive director of the Crossmen and chairman of the new Food Purchasing Committee which was assembled to implement the program. "Why not also leverage our buying power and eventually turn it into potential sponsorship opportunities?" The idea to combine resources and lower prices is not new. For the first time in 2007, Drum Corps International worked with an athletic distributor to negotiate costs on field paint which corps use almost every day throughout the summer season to line their football fields for rehearsal. DCI Operations Director Ric Oberlin says this helped save participating corps about 25 percent overall. After this first small success, DCI and other drum corps looked for more ways to save money. They formed the Corps Purchasing Committee in 2009 after the summer season with the help of Morrison, Genevieve Geisler from the Bluecoats, former DCI Board of Directors member Tom French, Troopers director Fred Morris, and others. "[French] had a connection with a broker and he had access to a peanut butter and a cereal manufacturer, which also produces mixed flour products," Morrison said. According to Oberlin, French, who works with a supply chain solutions and consulting firm, helped advise the committee on who to contact and where to go to save on common bulk purchases. 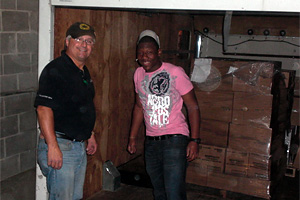 Steve Stueck and Eric Smith of the Blue Stars pick up a
bulk shipment of cereal and field paint at DCI's Indianapolis
HQ during the corps' spring training in May.
In 2009, corps had already made food orders before the purchasing plan could be implemented. But for the 2010 season, the committee started earlier, building on the information it had collected last year. "We went back to the distributor who had given us the price for cereal and peanut butter… now we just had to work on logistics," Oberlin said. They started small, focusing on six types of cereal, two brands of peanut butter, and breakfast mixes for pancakes and biscuits. Though perhaps dull to the uninitiated, these logistics are already saving corps money and have the potential to save much more in the future. This year, Morrison and Oberlin estimate the corps to be saving about 30 percent on the products included in the purchasing program. In some cases, savings are even higher. "I'd say on peanut butter, there was a minimum of 20 percent savings and in some cases 40 percent," Morrison said, comparing the negotiated prices of buying in bulk to what the corps had paid when buying their food individually. "On cereal, after compiling research on different corps, their best price savings was at 50 percent," he added. Next year, the committee hopes to "cut out the middleman" regarding food shipments to the corps. Oberlin says in some instances, rather than relying on costly distributors, food could be shipped directly to DCI's Indianapolis headquarters. There, food pallets could be broken down and carried with DCI's box truck to events where they would be distributed to the individual corps. While the program is making headway, some obstacles still remain. Morrison said options for Open Class corps have been limited, with shorter tour schedules and fewer members, making bulk shipments often less feasible. "I think after having this season under our belts with the World Class corps and having DCI HQ actually doing the breakout of truckload shipments, we'll be able to come up with a better plan for the Open Class corps going forward," he said. Despite some drawbacks, corps already see benefits from the purchasing program. As many large families stock up on certain foods to cut costs, corps can save on food bills for their own large families. Morrison, Oberlin and everyone part of the Food Purchasing Committee believe in continuing down this path. Morrison says, "Every dollar we save is one less we have to raise, or one more dollar for our programs."