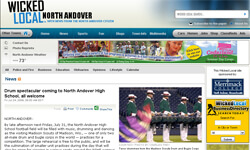 Drum spectacular coming to North Andover High School, all welcome The Madison Scouts are rehearsing at North Andover High School and will be putting on an exciting free show on Friday, July 31, according to the Beverly, Mass. North Andover Citizen. The corps will host an open rehearsal, educational clinic and full performance of their show for area music students and other audience members. Read more about the corps' stay in Massachusetts at WickedLocal.com. 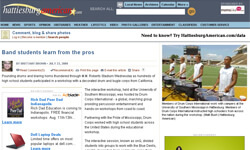 Band students learn from the pros Last Wednesday's "System Blue" Live Learning Event, hosted by the Blue Devils at the University of Southern Mississippi, caught the attention of the Hattiesburg American as students learned from the World Class drum corps. Read on to see what participants thought of the experience at HattiesburgAmerican.com 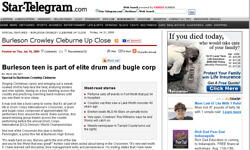 Burleson teen is part of elite drum and bugle corps The Fort Worth, Texas Star-Telegram recently featured Crossmen euphonium player Ashton Pennington. After jumping into the season a week late, this student from Burleson said he has battled an ankle injury, shin splints and blistering heat, but has also learned self discipline, time management skills and perseverance, made great friends and visited new places. Read more about his corps member at Star-Telegram.com. 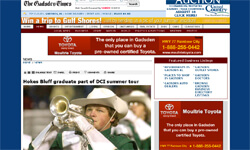 Hokes Bluff graduate part of DCI summer tour Madison Scouts member Tyler Campbell was the subject of an article published in the Gadsden, Ala. Times earlier this summer. A trumpet player, Campbell said performing with a drum corps makes him feel like a rock star, and he was excited to perform for his home crowd in Gadsden. He encouraged those with an interest in marching music to not let anything hold them back. Learn more about this Madison Scout at GadsdenTimes.com 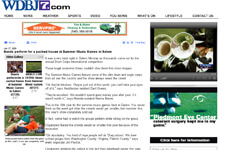 Bands perform for a packed house at Summer Music Games in Salem WDBJ7 in Roanoke, Va. covered the Summer Music Games of Southwest Virginia DCI Tour event earlier this week as a sold-out crowd filled the stadium to enjoy the drum corps show. View this video clip to see why organizers thought the show was so successful despite tough economic times. Watch the broadcast clip at WDBJ7.com 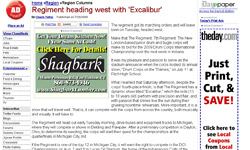 Regiment heading west with 'Excalibur' In this opinion column in the New London, Conn. Day, hear about one drum corps announcer's excitement about 7th Regiment's 2009 show, "Excalibur" and passion for supporting the smaller drum corps. Read more on TheDay.com