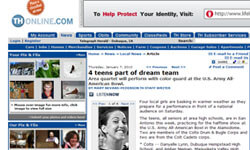 Corps members warming up in Texas while rehearsing for the U.S. Army All-American Bowl Rehearsals are never ending for the elite performers of drum corps. Between school, corps auditions, marching band and winter guard rehearsals, corps members continue strengthening their skills and experience. This week more than 25 will be performing in San Antonio, Texas for the U.S. Army All-American Bowl featuring the All-Drum Corps International Color Guard and U.S. Army All-American Marching Band. Check out these two articles by local media covering corps members that will be part of the all-star action. Four teens part of dream team THOnline.com South Lyon High senior to perform at U.S. All-Star Game HomeTownLife.com 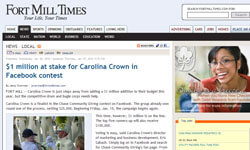 $1 million at stake for Carolina Crown in Facebook contest Along with the Cavaliers, the Colts and Phantom Regiment, Carolina Crown advanced to round two in the popular Chase Community Giving campaign. The Fort Mills Times posted an article this week to build local support and get their community to vote for Crown and the other three corps. FortMillTimes.com

Troopers looking forward to tone-perfect 2010 The state of Wyoming has always known when the Troopers are coming, but to get the excitement started early this year, residents were able to catch "Trooper news" in the Billings Gazette. The article featured updates on the corps' rehearsal camp schedule, a sneak peak at the summer and a special event listing for a fundraiser the corps has scheduled for later this month. BillingsGazette.com