The Cavaliers proved that rock can sounds good on more than just the radio, topping the first show of the 2007 Summer Music Games, held tonight at the Navy-Marine Corps Memorial Stadium in Annapolis, Md. The Green Machine opened their season with a 73.9 for their show "And So It Goes," featuring the music of Billy Joel. 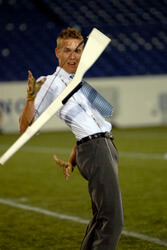 The Cavaliers
The Cavaliers' director Jeff Fiedler said that his corps had a very energetic performance tonight. "The last couple days have been really good for us. The intensity among corps members has hit a crescendo," said Fiedler. "They've stepped up, the staff has stepped up, and we've really put a good performance out on the field tonight. It may be one of our most energetic first performances in quite some time." The Bluecoats were close behind at 71.6 and sported a new look to go with their 2007 offering, "Criminal." The Cadets' "This I Believe" took the bronze medal with a score of 70.7. Carolina Crown, also in new uniforms, scored a 70.35 with their tribute to horse racing in "Triple Crown." Fans tonight voted Crown's brass section fan-favorite after a new text message voting promotion was launched to fans in the stadium. Listen to Carolina Crown Program Coordinator Jim Coates talk about the corps' performance (MP3). 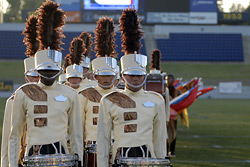 Carolina Crown
Glassmen's "Gitano" scored a 61.85, and Spirit from JSU, the third corps of the night in new attire, rounded out the night with a 60.9 for their show "Genesis." "Corps this season are stepping up and taking the time to prepare their students over the winter and through the pre-season," said Fiedler. "You can hear that coming through on the field, and it's great because it makes the activity that much better." View a complete scoring recap.