A corps member interview from the July 22, DCI San Antonio Southwestern Championship. Name: Andrew Hale
Age: 19
Hometown: Clinton, Tenn.
Drum corps experience: Glassmen 2006 What has been your favorite moment on tour so far? Getting to know everyone during the pre-season. Brian Hickman would sometimes tell us in meetings to go sit next to someone new, and I really liked getting to know the new people. 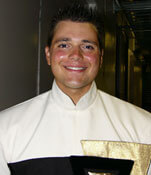 Andrew Hale
What is your favorite moment in your show? The climax of the second movement. I love the way the music makes me feel. I only play suspended cymbal there, but I really like the part as a whole. What made you choose the Glassmen? I had three amazing teachers that were members of Glassmen, and I only ever heard good things about the teaching. I liked every clip of music and every video I ever saw, so I pretty much had to march here. What do you miss most from home? Friends and family, and my computer, because when I'm home, I'm on it way too much. It's very weird not being on it – I do all my assignments, write music, check e-mail and play games. If I'm not practicing, I'm probably on my computer. I've only been on a computer once since we moved in, and that was in the bottom of a Burger King that had an Internet caf?© in it. I got on AOL Instant Messenger Express and said, "Hey, I'm in London!" and ran out of time, so everyone thought I was just being mean. What was your favorite thing from the Europe trip? We never had a normal day over there – weird thing after weird thing kept happening, every day. It was hilarious. The place where we warmed up at a site in France, there was a house right there, and it had a rooster. When we'd get bored, we tried to figure out what pitches the rooster was crowing, and what tempo it was at, and what rhythmic subdivision it would be written in at that tempo. This all happened in the space of one or two minute breaks from rehearsal, but it was the product of the height of boredom. What were you most looking forward to before tour? Has it lived up to your expectations? I was most looking forward to getting better, because I'm a music education major and I was really looking forward to learning all these new things. I can really tell a difference in my playing already. Anything else you want to say? Let all of my family and friends know that I am thinking about them, and I will see them in Atlanta, because they better be coming!