A corps member interview from the July 22, DCI San Antonio Southwestern Championship. Name: Melanie Weiss
Age: 20
Hometown: Allentown, N.J.
Drum corps experience: Cadets 2005, 2006; Raiders 1999-2004 What is your favorite drum corps story? One time at practice last year, the day before World Championship Quarterfinals, we were in sectionals. Tom Aungst, our percussion caption head, kept yelling at the bass line to clean up the unisons.   We kept repeating the same chunk over and over again. None of us could figure out what we were doing wrong! Then a bus pulls up behind us and he says, "Get on the bus, we're going out for ice cream." Turns out he was just stalling, waiting for the bus to get there. Meanwhile, we had been freaking out, thinking we were playing badly. 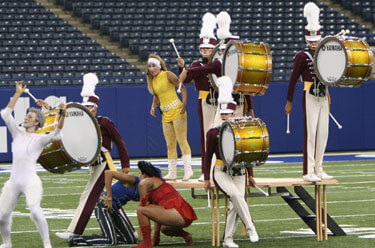 Members of the Cadets bass line during their bass feature.
What is your favorite moment in your show? Definitely the bass feature. We didn't have one last year, so this is pretty much my first bass feature. We get to sit on the tea table, in the spotlight. It's awesome. What made you choose the Cadets? The reputation of the drum line. At first I was thinking about going to another drum corps, but the Cadets were basically only an hour away. I figured I'd give it a shot. I had wanted to go to the Cadets since seeing the bass feature in 1995, the whole run-around thing. That made me want to become a bass drummer. Of course, I was something like 10-years-old at the time! I never thought I'd make it, but here I am now. What were you most looking forward to before tour? Has it lived up to your expectations? Just hanging out with the guys on the bass line. They're really awesome this year, and we've become really good friends. I'm going to miss them all. Anything else you want to say? Holy bass!