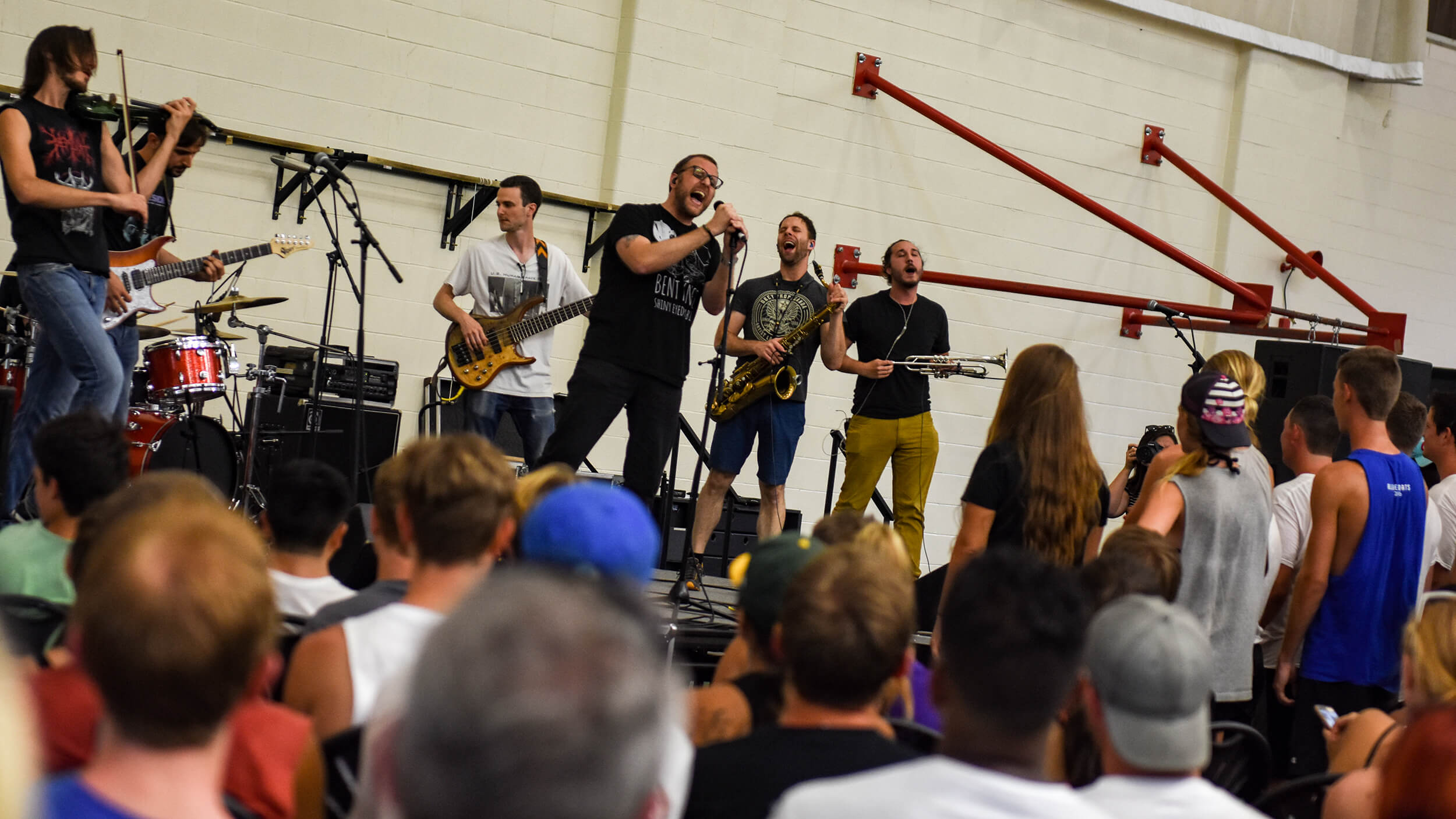 Progressive rock band Thank You Scientist performs for the Bluecoats in 2017.Photo by: Drum Corps International

7th Regiment thanks DXC Technology for the donation of a number of laptop computers.

For a gift of $100, donors may have their name and a short inspirational message of their choice embroidered inside one of The Academy’s 2019 uniforms.

The Battalion is seeking a food services manager to travel with the corps from July 2 through July 25. This is a paid position.

Blue Devils will be in action April 26-28 for a rehearsal camp at Los Medanos College in Pittsburgh, California.

This past summer the Bluecoats participated in a recording session with progressive rock band Thank You Scientist, and the video just dropped. Bluecoats formed a relationship with the band in 2017 when performing one of the group’s tracks in their “Jagged Line” production.

Profits from Boston Crusaders’ “I Support Giants” T-shirts go toward the tuition/fees of a member or section of the buyer’s choosing. The shirts will only be on sale one more month.

Carolina Crown is looking for a couple hardworking, physically fit individuals to help the corps manage and maintain its props during the 2019 season.

Encorps has a number of positions open in its brass, drum line and color guard sections. The corps’ next rehearsal/audition camp will be April 27-28 in Monmouth Junction, New Jersey.

Guardians is looking for a couple more trumpet, mellophone, and baritone players, as well as one more tubist and a few percussionists.

Impulse recently revealed the title of its 2019 production, “The Greatest Hero.”

Incognito will host its first audition camp of the 2019 season on April 28 in Brea, California.

It’s not too late to register for Legends’ April 26-28 rehearsal camp weekend in Battle Creek, Michigan. The corps has openings for trumpet, baritone/euphonium, tuba, vibraphone and color guard.

April 30 is the deadline to apply to be a Music City media intern. Positions are open in video, photography, and social media.

Phantom Regiment will be hosting a variety of educational camps for color guard members, drummers, and drum majors this summer in five different states.

Until April 26, every contribution to Santa Clara Vanguard’s fund for the corps’ new food truck will be matched dollar for dollar by the corps’ board of directors, up to the first $10,000.

Seattle Cascades has a few open brass and color guard positions. The corps’ next audition camp is April 26-28 in Bonney Lake, Washington.

Video auditions are available for Shadow’s remaining color guard and brass openings. An audition/rehearsal camp will be held April 26-28 in Oregon, Wisconsin.

The second round of Spirit of Atlanta color guard auditions will be held April 26-28 in Jefferson, Georgia. Spots are still available. https://www.facebook.com/shadowdbc/videos/2235328989839808" target="_blank" rel="noopener">SpiritDrumCorps.org

You can listen to the “Long Blue Line" by Ernesto Aguirre, winner of the 2019 Troopers All-American Street Beat Contest.

Watchmen color guard auditions will be held April 20 and 21 in Bloomington, California. The corps also has openings in the brass and percussion sections.