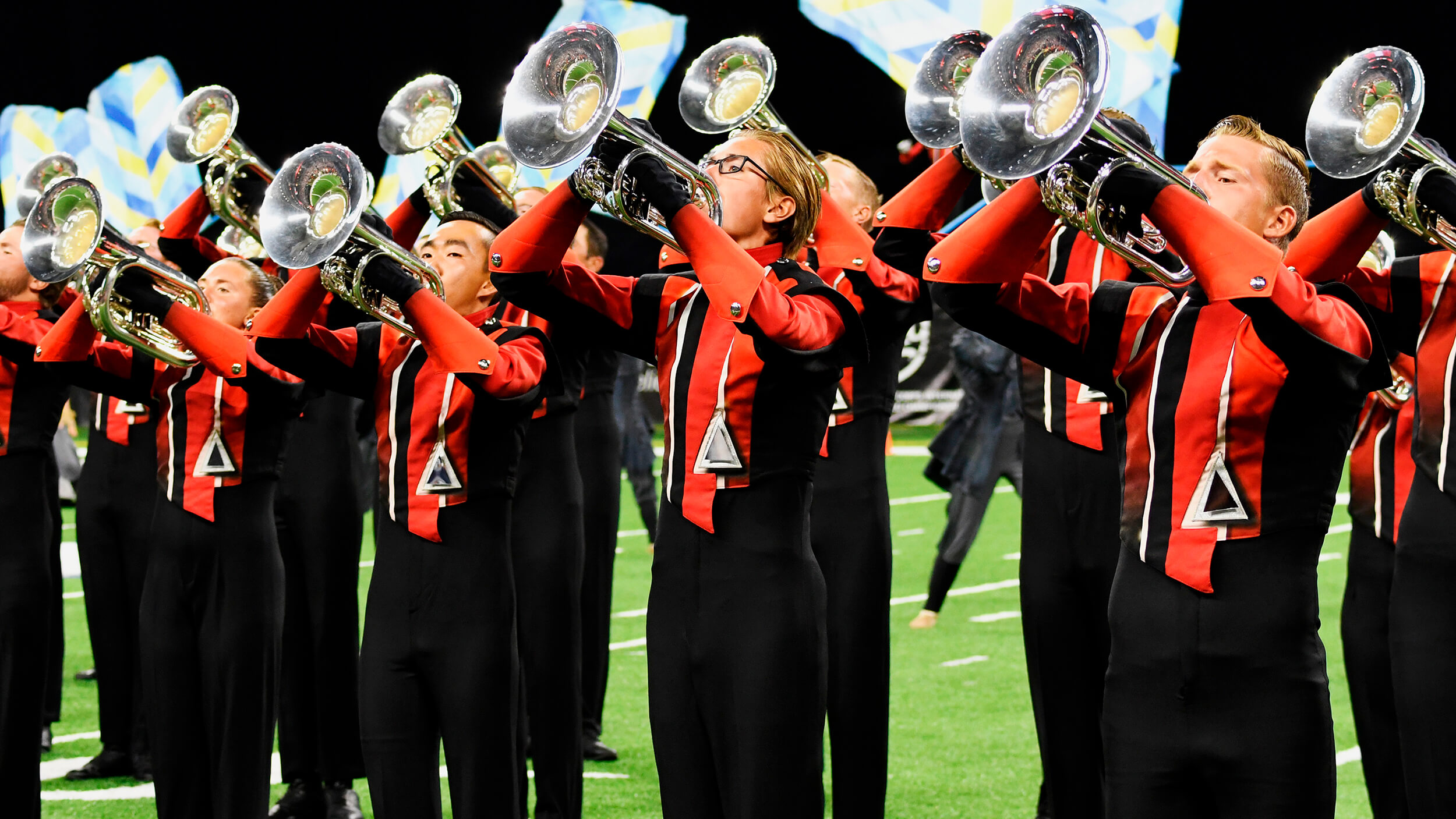 Colts are saying goodbye to their traditional red and black uniforms for a bold new look in 2019.Photo by: Drum Corps International

The Academy recently revealed its 2019 show title and musical selections.

The Battalion has immediate openings for trumpet, mellophone, flugelhorn, and tuba players, prior to the start of the corps' spring training on June 9.

2019 T-shirts for all three Blue Devils corps are now available.

Blue Knights released the first installment of "Behind the Blue," a weekly video insight into the corps’ 2019 tour. This week's episode highlights the late season snowfall that visited last weekend’s rehearsal camp.

Blue Stars relased a list of repertoire for “Call of the Wild,” the corps' 2019 competitive production, which features music by Vivaldi, Tchaikovsky, Copland, and others.

A "Bluecoats History Mystery Box" is available for any fans who sign up for the corps' "The Shield" program at the $25 level or higher.

The Boston Crusaders have been awarded two Cultural Facilities Fund grants from the Mass Cultural Council that will allow the organization to improve and expand its programs to further serve New England communities.

The Cavaliers’ recently introduced fans to the individuals heading up the corps' various staff teams.

Colts revealed the new uniforms the corps will wear for its 2019 competitive production, "When Hell Freezes Over."

Colubmians announced the title of their 2019 competitive production, "Origins."

Crossmen currently has a handful of volunter needs. Specific duties and dates are listed on the corps' website.

Impulse will host its 2019 Family Day — an evening of food and drink, live music, and other fun — June 8 in Anaheim, California.

Incognito is looking for two trumpet players and a bass drummer, in addition to three color guard performers. The corps is also willing to add any number of members to the front ensemble.

Jersey Surf revealed the title of its 2019 ocean-themed production, "Fantasea."

One baritone and two euphonium positions are currently available via video audition for Legends’ 2019 tour.

Pacific Crest has an immediate opening for a backfield conductor.

Phantom Regiment recently provided an entertaining video that takes a look at the daily duties of a corps tour manager.

Santa Clara Vanguard members had some fun outside of rehearsal with the corps’ second annual “Salute to Salutes” competition.

Seattle Cascades is accepting applications for a variety of support staff positions and drivers for the group's upcoming summer tour.

Shadow is seeking a medical professional to tour with the corps between June 21 and August 11.

Friends and family are encouraged to join Spirit of Atlanta alums to enjoy the corps’ Alumni First Look event on Saturday, June 1 at Luella High School in Locust Grove, Georgia.

Vanguard Cadets had a busy Memorial Day weekend rehearsal camp, which was documented on social media with an array of photos.