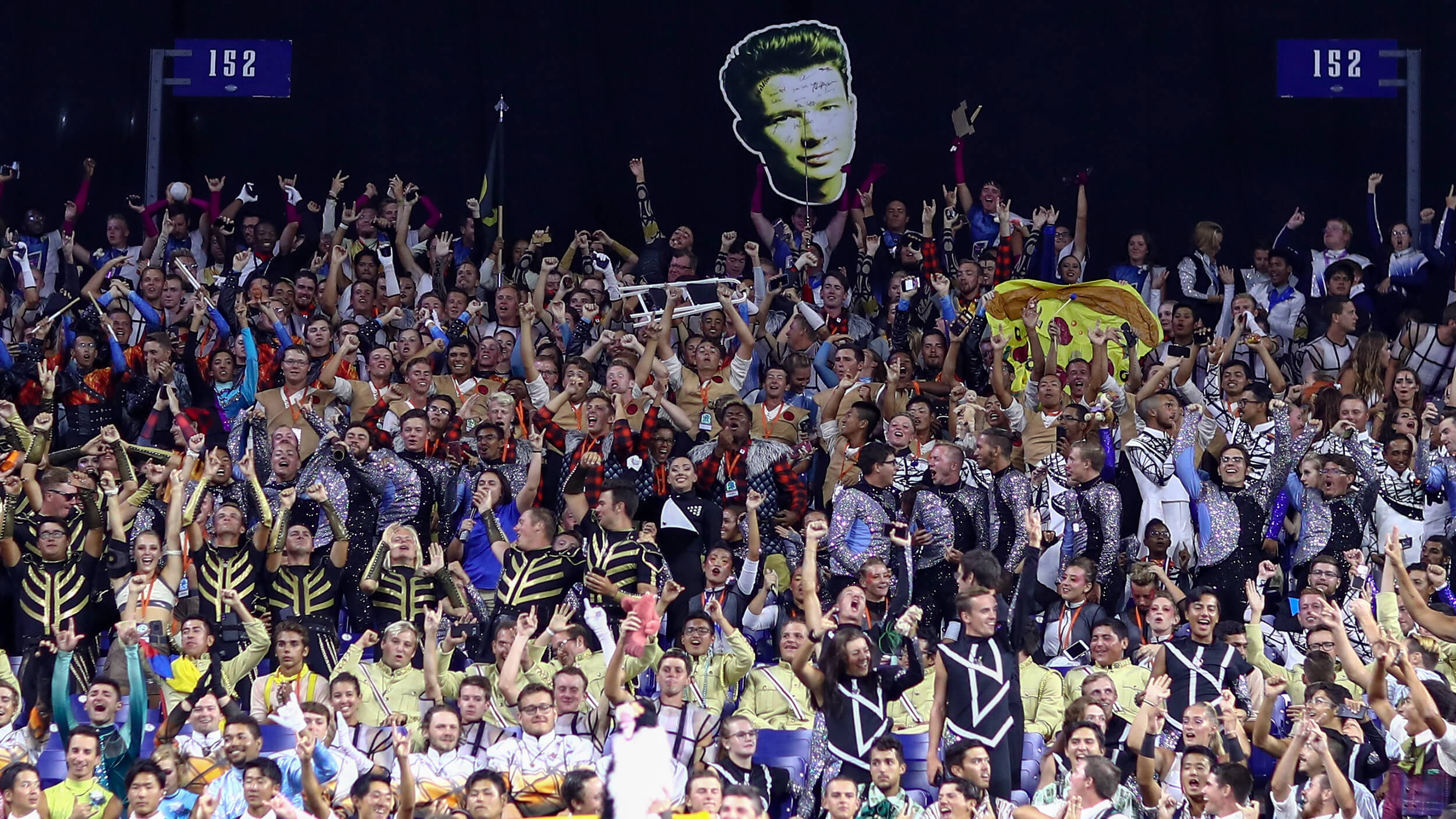 Age-out corps members gather in the stands of Lucas Oil Stadium during the 2019 DCI World Championships.Photo by: Drum Corps International

• Rick Astley never gonna give Cascades up
• An inside look at Spirit of Atlanta's cymbal line
• Crown's award-winning brass line in the lot
• And more!

All who are interested in learning more about joining The Academy next year are encouraged to join the 2020 Academy audition interest group on Facebook.

A 2020 BKXperience one-day educational clinic will be held for those interested in all sections of the corps on November 10 in the Dallas-Fort Worth area. In addition, another similar clinic will be held November 17 in the Southern California area, with a brass-only event held that same day in Canyon, Texas.

Registration is open to prospective members of all sections of The Cadets’ 2020 corps. Events will be held November 23-24 in Houston and Philadelphia, followed by a similar event on December 7 in Orange City, Florida.

An audition interest form is now available for those interested in becoming members of The Cavaliers’ 2020 corps. Audition dates are planned for the full corps in Illinois and Texas, and for various sections of the corps in Florida, Georgia, Indiana, California and Japan.

Auditioning students and their parents are encouraged to find out what the Colts organization is all about by requesting information about the audition process and signing up for email alerts. There is no obligation to become a member even after attending a rehearsal.

Now on sale from the Crossmen, a "Bones" bobble head is the perfect accessory for any drum corps fan who wants to make a fashion statement at their work desk.

Woods Road Fire Company in Hillsborough, New Jersey will play host to Encorps' Food, Wine, and Brew Fest on Sunday, October 10, which will help the corps kick off 2020 on a strong note.

An interest form is now available for those wishing to learn more about auditioning for the 2020 edition of Guardians.

Legends 2019 show flags are now available for purchase. In addition, there are still flags to be sold from the corps’ 2017 and 2018 production.

Check out this set of photos recapping the Louisiana Stars’ 2019 season both on and off the football field.

Madison Scouts gave a tip of the cap to its age-out class of 2019.

The Sacramento corps has added a Facebook page for those interested in learning more about auditions for the corps’ 2020 ensemble.

From the warm-up lot to inside Lucas Oil Stadium, check out this World Championships Week gallery of Music City.

Phantom Regiment posted a huge photo gallery recapping every step of the last day of the corps' season during the DCI World Championship Finals in Indianapolis.

Raiders has Facebook interest groups available for each section of the corps where prospective members can chat with one another about drum corps and encourage each other to take a chance on having the time of their life.

Mike Webster, an age-out member of River City Rhythm, had a brilliant idea for a memento he’ll cherish the rest of his life. See what he did during the massed-corps age-out ceremony on the field of Lucas Oil Stadium during the DCI World Championship Semifinals.

One of the featured artists in Seattle Cascades' 2019 repertoire and a fun inspiration for the corps' members this season, Rick Astley featured Seattle Cascades in a recent set of fan photos on his Twitter account.

This video of Shadow's 2019 percussion exercise book in action shows how the line warms up in a rather fun and unconventional manner.

“We need to move these quickly," says the Spartans about eight 15-foot rolling platforms that are currently available for sale.

Only six World Class corps featured cymbal lines this past summer. A recent video detailed what it’s like to be in Spirit of Atlanta’s line.

Troopers is selling its 45 color guard costumes from its 2019 season.