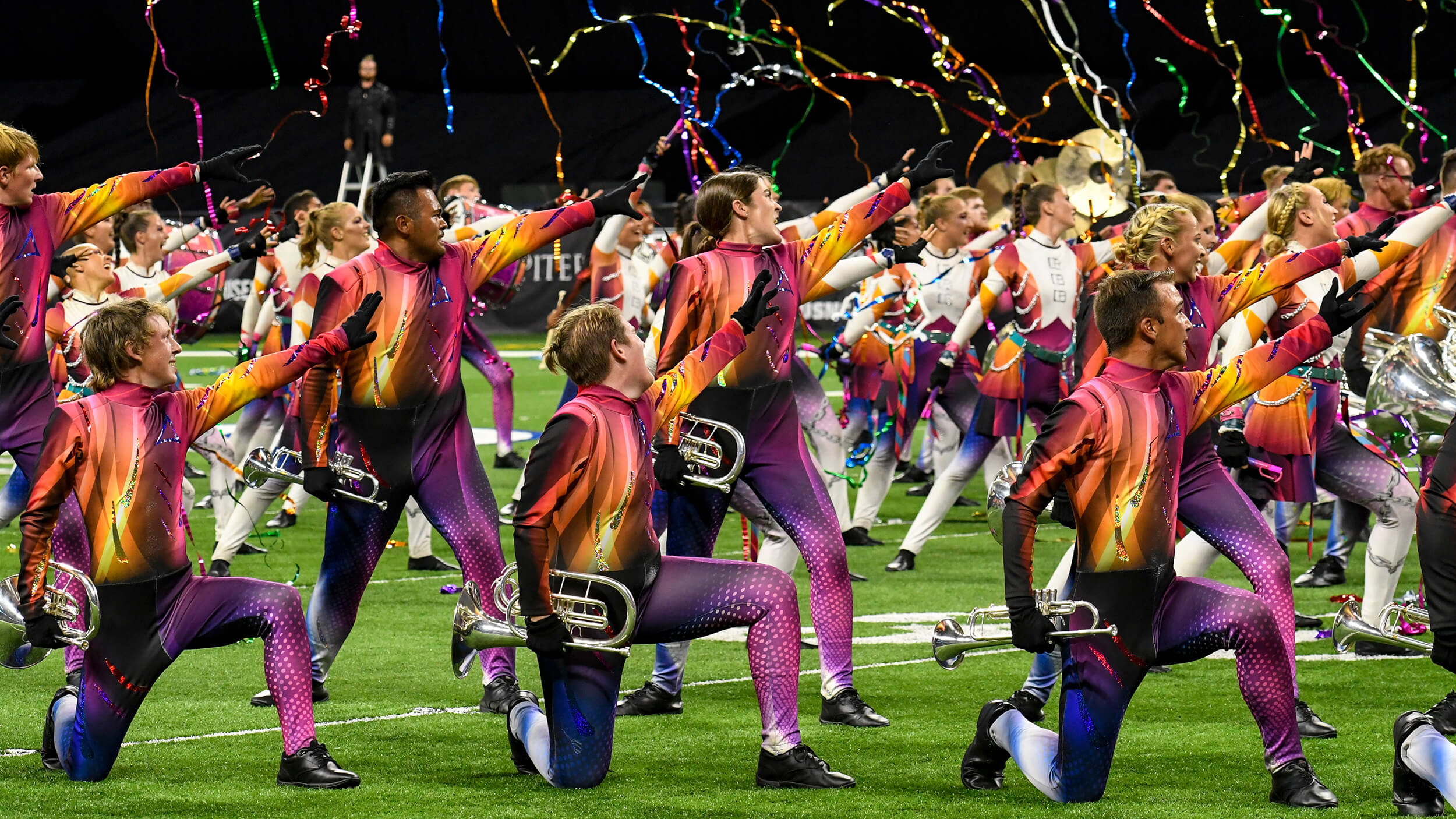 All are invited to attend 7th Regiment’s 2019 annual meeting the morning of Sunday, November 3 in New London, Connecticut.

In association with the Arizona Band & Orchestra Directors Association, The Academy has produced a series of educational videos for instructors.

This past weekend members of Blue Devils C hosted a season-ending awards ceremony and potluck dinner.

Bluecoats’ featured 2019 drum set, which was designed with maple shells to match the original Ringo Starr drum set, is now available for sale. In addition, the corps has Yamaha baritones and euphoniums for sale.

Five new additions have been made to Boston Crusaders’ 2020 educational staff, including two percussion consultants and instructors for tuba, bass drum, and front ensemble percussion.

Those who are unable to attend a Cadets audition camp in person may submit a video audition.

Flags used in Carolina Crown’s 2019 “Beneath the Surface” production are now available for purchase.

The Cavaliers’ brass caption manager, Kevin LeBoeuf, will be conducting a brass-only audition experience in Nagoya, Japan on November 10, 2019.

Colt Cadets rehearsal camps have been scheduled in Dubuque, Iowa for percussion April 26-28, and for all sections May 17-19, 2020.

Washington State-based Columbians audition sites have been posted for November 16 in Lynnwood, November 23 in Spokane, and December 7 in Tri Cities.

Matt Krempasky, who has previously arranged music for Crossmen and Spirit of Atlanta, has been named the new arranger for Encorps.

A Genesis satellite audition camp is scheduled for November 9 in Denton, Texas for all sections.

An Impulse audition weekend is scheduled for November 30 to December 1 in Rancho Cucamonga, California.

Sunday, October 13 is the deadline to apply for the position of brass supervisor for Legends, as well as various brass instructor positions.

Meet the members of Madison Scouts' all-new percussion instructional staff who will be led by caption head Ryan Ellis.

Mandarins audition registration is now open for the corps' 2020 season.

Registration to audition for Music City’s 2020 corps begins on October 15.

Pacific Crest percussion staff members will be teaching three-hour drum clinics in Fullerton, California on November 24, December 1, and December 8, 2019. Snare and tenor drummers are welcome to attend all three dates.

Phantom Regiment added a number of new names to its creative design team. “Many of them have previous experience either with Phantom Regiment or with each other," corps manager David Warren said. "I can’t wait for the creativity that comes from this type of team synergy.”

Vanguard Music and Performing Arts, the parent organization of Santa Clara Vanguard and the Vanguard Cadets, this week named Brett Bernardini as executive director. "I am honored to be here at Vanguard to build upon its remarkable history, to honor and celebrate those whose passion has brought us this far and to partner with the board of directors, alumni, members, volunteers, supporters, and the business community in building a dynamic future for the next 50 years,” Bernardini said.

Courtney Allen has been named corps manager of Shadow. "As someone who was raised around drum corps and drum line, I am thrilled to be giving back to the activity that has brought me so much joy as a young adult," Allen said.

The 65 for 65 Club offers new sponsorship opportunities for fans of Spartans to help raise $65k to celebrate the corps’ 65th anniversary.

Troopers is offering a free educational brass clinic and audition opportunity for all Wyoming-area brass students on November 23 at the University of Wyoming.