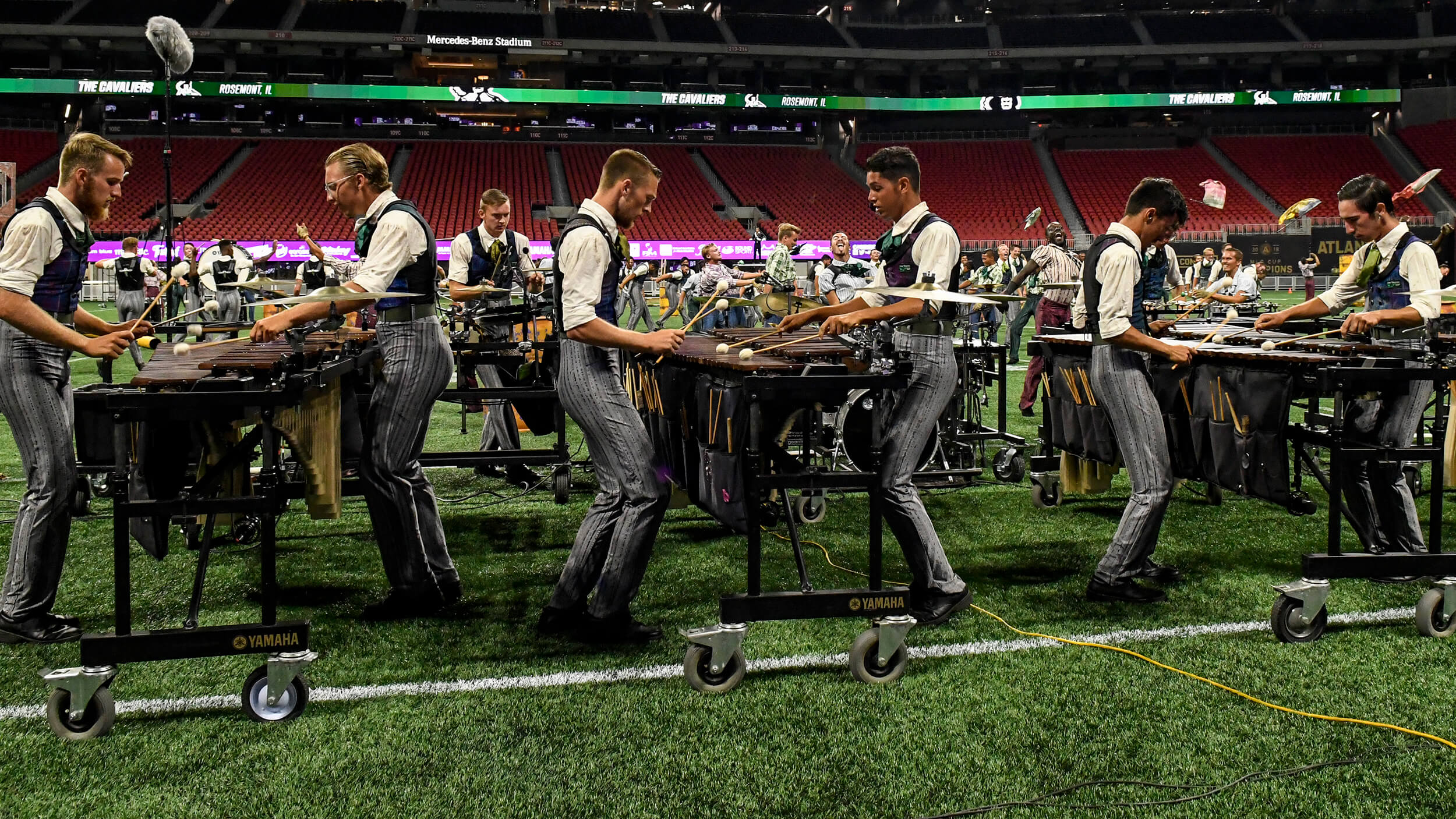 The Cavaliers percussion section performs during the 2019 DCI Southeastern Championship in Atlanta.Photo by: Drum Corps International

7RXperience, a one-day 7th Regiment open house, is coming up on November 24 in Oakdale, Connecticut, with auditions to follow December 13-15 at a site to be decided.

The Academy will experience a big day on November 10 with auditions for brass and color guard in Blue Springs, Missouri and auditions for all sections in Chino Hills, California.

Blue Devils B auditions will be held December 14-15 in Concord, California, with video auditions accepted until January 10, 2020.

Blue Knights will be holding drum major auditions at its November 22-24 BKXperience camp in Denver.

Check out the Blue Stars front ensemble warming up outside Lucas Oil Stadium during the 2019 DCI World Championships.

In a recent blog post by Timecounts.org, Bluecoats CEO Mike Scott discusses how his organization relies on volunteers. “I love being constantly reminded that people love to give back, give freely of their time, and join in the collective love of seeing young people reach for the stars,” he said.

A 20% discount on Cadets gear is only good through October.

A recent Halftime Magazine article titled “The Uniqueness of DCI Uniforms,” credits Carolina Crown with shaking things up in 2013 with its “E=mc2” purple stretch pants, becoming “a pioneer in the new DCI tradition of annual costume changes.”

In his 17th year with The Cavaliers, Michael McIntosh will be leading a 2020 percussion team comprised of new and returning staff members. “We are fortunate to have an especially talented group of returning and new educators who embody the organization’s educational priorities and drive for dynamic performance and excellence,” said corps director Michael Vaughn.

Brass and percussion players have a new opportunity to audition for the Colts on January 5 in Atlanta.

A Crossmen experience camp for all sections will be held November 10 at Centerville High School outside Dayton, Ohio.

Encorps has hired Jordan Fisch as the corps’ new visual designer. He and other staff will be in attendance at the audition-focused Encorps Experience Day on November 17 in South Brunswick, New Jersey.

Taylor Smith, a veteran horn player for Blue Devils and a brass instructor for numerous DCI corps, has been appointed as the brass caption head for the 2020 edition of Impulse.

An anonymous donor is covering a significant portion of Jersey Surf’s expenses for its November 22-24 experience and audition camp in Sicklerville, New Jersey. This generous donation will allow those interested to attend the event for the low price of $30 when registering prior to November 21.

Hear from first-year Madison Scouts program coordinator Jason Robb about how the organization has assembled its new design and instructional teams to bring the corps' 2020 production to life.

With "2020 in planning stages," corps director JW Koester gives the latest on the corps' off-season preparations.

The price to audition for the 2020 edition of Phantom Regiment will be discounted until October 31.

The first River City Rhythm audition camp for the 2020 season will be held December 13-15 in Minnetrista, Minnesota.

The Santa Clara Vanguard color guard will be holding upcoming auditions in California, Texas, and Florida.

Seattle Cascades auditions for all sections in the Portland, Oregon area will be held on November 16 at Kelso High School.

Shadow will be auditioning for its WGI indoor percussion line on November 16 in Oregon, Wisconsin.

Continuity is key for Southwind's percussion staff, and the group will once again be led in 2020 by co-caption heads Elanders Frazier and John Gaal. “We grew up a lot this past year, and percussion helped lead the way," director Lawrence LeClaire said. "Our percussion made big strides over 2019, and all credit is due to our great percussion staff."

Audition packets for the 2020 Spartans front ensemble and battery percussion have been uploaded, and the corps has announced its first audition camp will be held in Nashua, New Hampshire the weekend of November 22-24.

There is only one month left before Spirit of Atlanta holds its first auditions for all sections in Atlanta, the weekend of November 22-24.

Visual caption manager Anthony Clark will be leading the returning and new faces of the 2020 Troopers visual staff. “I am so thrilled with the level of talent that will be joining us this season," said corps director Kristy Jackson. "I am honored to welcome each and every member of the visual team to the Troopers and look forward to creating an environment that will have a positive lasting impact on the youth of our organization.”

The Exodus Ensemble Winter Guard is the newest member of the Watchmen family. Competing in WGI Independent Class A, the guard, led by Alex Vasqueaz and Randy Badillo, will compete in the Winter Guard Association of Southern California.