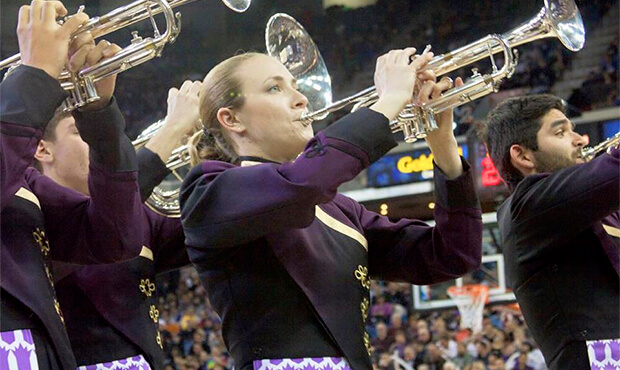 The Mandarins Entertainment ensemble plays to a huge crowd at a recent Sacramento Kings game.

• Mandarins fire up the NBA's Sacramento Kings • Phantom Regiment puts together an instrument "petting zoo" • The Academy adds a new SoundSport team to its roster of performing ensembles • And more!

The Academy The Phenom SoundSport ensemble has been added as the newest program offering of the Arizona Academy of the Performing Arts. "Phenom SoundSport ensemble is an outstanding avenue that local students can pursue to increase their involvement with the pageantry arts and another way for our organization to further integrate itself into our local community," Academy Executive Director Mark Richardson said. ArizonaAcademy.org

Blue Devils The Blue Devils are all set for their January rehearsal camp in California. Check out the hour-by-hour itinerary for this weekend. BlueDevils.org

Blue Knights As a recurring donor, you can get special behind-the-scenes insider updates on Ascend Performing Arts performing ensembles including the Blue Knights. AscendPerformingArts.org

The Cadets Watch and listen as Cadets corps members rehearsed sections of their 2015 production, "The Power of 10," last weekend in New Jersey. DCI.org

Cascades In one of the corps' latest YouTube uploads featuring video and photos from its 2014 season, the Cascades ask, "What did you do last summer?" YouTube.com

Crossmen Crossmen is currently seeking administrative interns to join the corps for its 2015 summer tour. Crossmen.org

Jersey Surf A recent Jersey Surf age-out tuba player blogs about what it was like visiting the corps for the very first time as an alumni member. JerseySurf.org

Madison Scouts The Madison Scouts organization introduces its three drum majors who will lead the corps during its 2015 summer season. MadisonScoutsLive.com

Mandarins Check out these photos of the Mandarins Entertainment ensemble in action during a recent NBA matchup between the Sacramento Kings and Dallas Mavericks. Facebook.com

Pacific Crest Pacific Crest promoted Seth Murphy to the position of program director where he will be in charge of instruction, design and membership. Joining the corps' team in 2012, he most recently served as brass caption head. Pacific-Crest.org