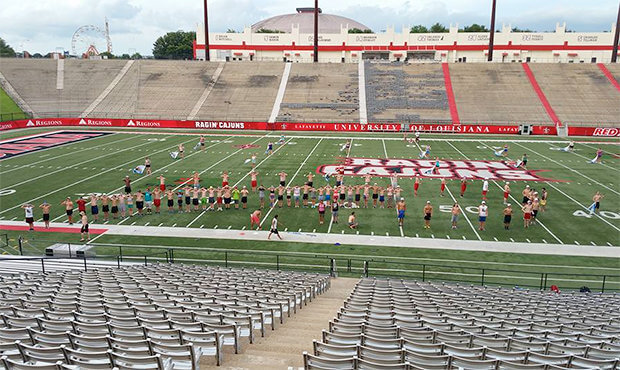 • Inside the Louisiana Stars' Ragin' rehearsal

• Upcoming special events for a number of corps across the country

The Academy’s annual CenterStage show will be take place June 5 and 6 at the Tempe Center for the Arts.

Blue Devils just released a trailer for the 2015 edition of their “BD360” video series.

Blue Knights are looking for a number of sets of helping hands to serve as van drivers and food service volunteers during parts of the corps’ upcoming summer tour.

A local news station put together a feature on the Blue Stars as the corps rehearsed at its spring training home in Forest City, Iowa.

Members of the Boston Crusaders tuba section star in this educational “contra-mentary” video that details their primary instrument.

The Cadets will be live-broadcasting their rehearsal Friday night at 8 p.m. ET on Periscope.

In a new video, we’re introduced to Crossmen percussionists as they provide an update on their latest spring training rehearsals.

Check out this video trailer that Eruption posted as the corps gets set to kick off its 2015 summer tour.

Guardians is hosting an annual fundraising raffle. By entering, you’ll have the chance to win a cash prize while helping the corps make it down the road this season!

The Louisiana Stars just finished their first spring training rehearsal camp. Check out these photos from Cajun Field on the corps’ Facebook page.

The Mandarins are preparing for their upcoming Family Day event which will take place on Saturday, June 13, in Elk Grove, California.

Phantom Regiment will help kick off the “Music in the Park” concert series on Tuesday, June 9, at the Sinnissippi Music Shell in Rockford, Illinois.

Pioneer launched a new website, which includes a photo gallery from the corps’ spring training rehearsals.

The Raiders recently marched in New York City during the Celebrate Israel Parade. Check out photos from the event on the corps’ Facebook page.

Catch up with Santa Clara Vanguard’s recent activity in their latest blog post.

The Spartans are celebrating the corps’ 60th anniversary with a friends and family pre-show “Birthday BBQ.” Get your tickets now to support the members and enjoy a performance by the corps.

Spirit of Atlanta posted a teaser video with rehearsal footage of the corps’ 2015 production, “Out of the Ashes.”

Troopers still have open spots in the color guard, mellophone and tuba sections.