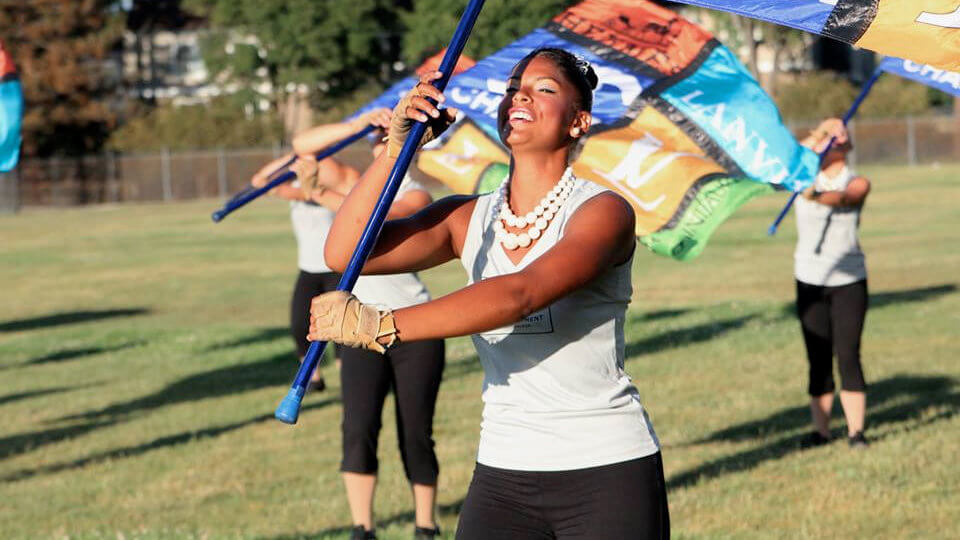 Phantom Regiment's color guard warms up before a recent show in Santa Clara, California.Photo by: Facebook

• The Oregon Crusaders debut their 2015 production

• Meet the newest members of the Colts Hall of Fame

Mark your calendars for this year’s free exhibition performance by 7th regiment, to support the members of the corps before they leave for their summer tour.

As the Academy begins its season tonight, take a look back at their spring training in Eagar, Arizona with this video retrospective.

Blue Devils show designers and instructors would like to have a conversation with you about their 2015 program, “Ink” in this recently posted YouTube video.

The Blue Knights gave a Father’s Day thank you to the dads volunteering with the corps during its summer tour.

The Blue Stars are still looking for volunteers to help with their 2015 tour. Those interested can sign up online.

Go behind the scenes with the first "Cadets All-Access" video of the season.

Cascades will host a preview performance of their 2015 production at 7 p.m. PT on Tuesday, June 30, at Cedar Crest High School in Duvall, Washington.

Check out photos from the first week of spring training rehearsals for Coastal Surge.

Congratulations are in order for the newest members of the Colts Hall of Fame.

The Crossmen posted a series of photos featuring the sky above (and beyond) their rehearsals.

The Louisiana Stars are asking you to “Be a Star.” Donations and sponsorships are being accepted to help purchase new uniforms for corps members.

Check out the latest news from the Mandarins in this video.

Music City still has a rifle opening in its color guard, and applications are still being accepted.

The Oregon Crusaders will debut their 2015 program, “The Midnight Garden,” at their annual Preview Gala and Dessert Auction on Sunday, June 28, at Tualatin High School in Oregon.

Catch up with the latest from Pacific Crest in the corps' latest “Rising Tides” blog post.

One of Phantom Regiment’s color guard members tells you all about the corps' last few days on tour.

A member of River City Rhythm has been keeping a blog about her experience as a member of the corps' bass drum section.

The Spartans are hosting a Family and Friends Day this Saturday. A barbeque dinner is included with admission.