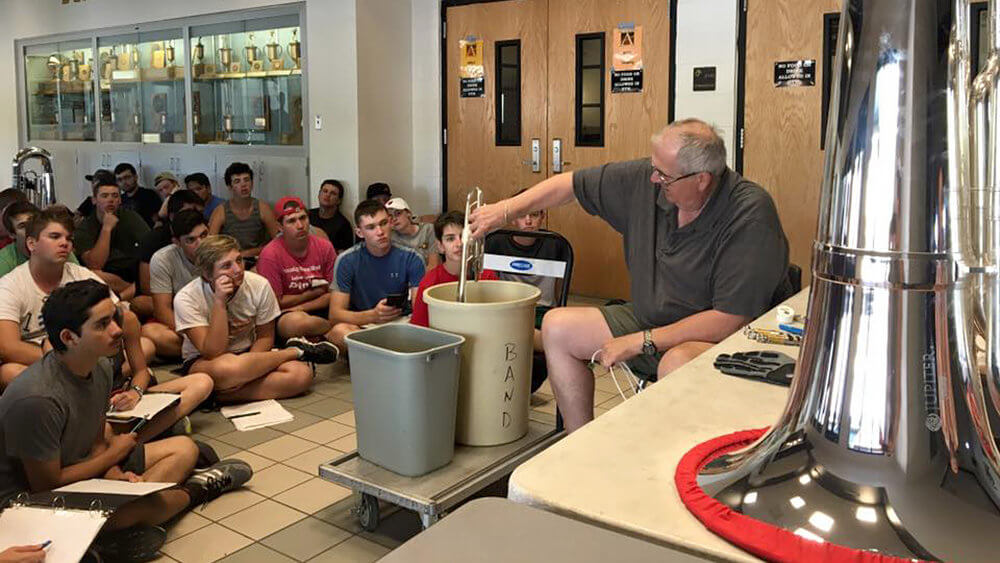 The Academy got a tutorial in instrument upkeep during a recent rehearsal camp.Photo by: Facebook

• The Academy gets a lesson in instrument upkeep

• One year later and Jersey Surf still isn’t looking down

During a recent rehearsal camp, Academy members got a tutorial on instrument care and upkeep.

Hosted in conjunction with the Drums Along the Rockies DCI Tour event, the Blue Knights will host the BKXperience-Perform! educational clinic which the organization touts as “a day of camaraderie and unparalleled instruction for anyone who is looking for a challenge that serves a lifetime.”

The Blue Stars have a number of open volunteer needs to fill before the corps’ 2016 summer season gets underway less than 80 days from today.

Bluecoats’ Artistry IN BLUE ensemble is off to the WGI Sport of the Arts World Championship this weekend in Dayton, Ohio.

Cadets drum major Kendall Stevenson will be out in Dayton, Ohio, this weekend, posting live updates from the WGI Sport of the Arts Color Guard World Championships to the corps’ Instagram account.

A part of the organization’s 2016 Crown Jewels fundraising campaign, you can help “Charge Up” Carolina Crown for what the corps anticipates to be its strongest season ever.

Matt Ownby will join the Cavaliers this summer as the corps’ tour operations manager. “Matt brings an infusion of passion, along with an impressive background in education and administration, that will elevate our tour operations and management team,” corps director Mark Ackerson said.

Crossmen is less than four weeks away from “The Big Give SA,” a campaign during which the corps will try to reach a fundraising goal of $20,000.

A handful of Genesis members recently took part in a commercial shoot.

It was a year ago that the Jersey Surf took part in actor and musician Janina Gavankar’s “Don’t Look Down” music video.

Louisiana Stars has upcoming color guard auditions on April 24 in Lafayette, Louisiana. The corps also has several openings in its brass section.

The Oregon Crusaders Independent color guard finished in fifth place during the Independent Open Class Prelims at the WGI Sport of the Arts World Championships on Thursday in Dayton, Ohio.

The Drum Corps International Tour will make a stop this summer at Rose Bowl Stadium in Pasadena, California.

The latest updates from Pioneer are in the corps’ “News from the Top” roundup.

River City Rhythm’s Lux Independent Winterguard is in action this weekend at the WGI Sport of the Arts World Championships in Dayton, Ohio.

The Santa Clara Vanguard Winter Guard came out on top during the WGI World Championship Prelims competition in Dayton, Ohio on Thursday.

Southwind’s color guard audition and rehearsal camp is coming up on April 16 in Jackson, Mississippi.

The Spartans’ color guard section will be back in action Sunday, April 17, in Nashua, New Hampshire.

Registration is now open for those who would like to volunteer with Spirit of Atlanta during the corps’ upcoming summer tour.

Over the next several months the Troopers will be crowdfunding various T-shirt designs.