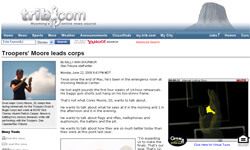 Troopers' Moore leads corps Participating in a drum corps is challenging and exhausting for everyone, but imagine doing a summer tour while overcoming two chronic diseases. That is exactly what the Troopers' drum major, Corey Moore, is doing this summer, as the Casper Star-Tribune reported. A third-year Troopers member, Moore doesn't want to talk about medicine or blood tests, only the corps he loves. Read about this extraordinary drum corps member at Trib.com. 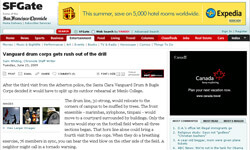 Vanguard drum corps gets rush out of the drill Santa Clara Vanguard is doing what they can to avoid a fourth visit from the police as they rehearse in Atherton, Calif. this week. The corps' sections split up and scattered to opposite corners of Menlo College's campus to avoid more noise complaints as they continue rehearsing 12 hours a day for their next competition, DCI West in Stanford this Saturday. Read about Santa Clara Vanguard's summer tour at SFGate.com. 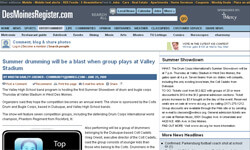 Summer drumming will be a blast when group plays at Valley Stadium The Des Moines Register reported on DCI's Summer Showdown event, hosted by the Colts and happening Thursday at Valley Stadium in West Des Moines, Iowa. Alum Christian Baughman remembers marching as a member of a drum corps and how the experience cemented his choice to be a band director, and Executive Director Greg Orwoll gives details about the Colt Cadets in this preview article. Read the article at DesMoinesRegister.com.