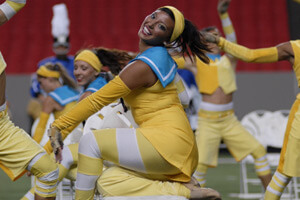 Blue Devils
Still at the top of the heap, Blue Devils wowed more than 12,000 fans at the Atlanta Georgia dome on Saturday, July 25, with a first place finish at the DCI Atlanta Southeastern Championship presented by Lake Oconee & Greene County, Ga.. "The corps is extremely hungry and that's what we love about them," said Blue Devils percussion caption head Scott Johnson. "After last year, we are not relaxing at all. The corps members are just as hungry as the staff. We keep feeding off of each other and it's working great." Coming off of high scoring shows in Hattiesburg, Miss. and Murfreesboro, Tenn., as part of the DCI Southern Series, the Blue Devils increased their score by more than two points in just over 24 hours. "Last night's show in Murfreesboro kicked the staff's butts – we were not expecting that performance," said Johnson. "The rehearsal today was off the charts and the run-through was by far the best we've had all year."
Blue Devils drum major John Lee on the corps' win at the Atlanta Georgia Dome. 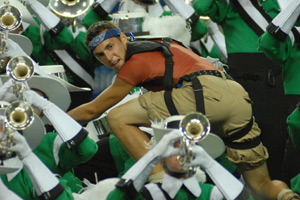 The Cavaliers
The Cavaliers ended up in second place with a score of 93.45 as the perennial powerhouse from Rosemont, Ill. plays catch-up to the Devils. Color guard captain, Brandon Givens said that this year's group is doing exceptionally well, as the color guard members continue to improve their skills daily. "I've been in the color guard for six years, and I can definitely say that this is the best section we've had. I'm very proud of what we did tonight. We have a lot of talented people," he said. The fight for the number three spot was a close race between Carolina Crown (3rd, 92.60), Holy Name Cadets (4th, 92.55) and Santa Clara Vanguard (5th, 92.00). The hot competition behind the top ranked Blue Devils and Cavaliers hasn't settled down as Crown stepped ahead of Holy Name for the third time this season. 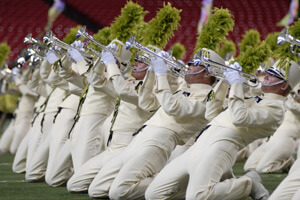 Carolina Crown
Fifth-year Carolina Crown trumpet player, Preston Cheek, said the corps doesn't focus on individual scores and rankings to gauge progress throughout the season. "At Crown, we're all about meeting our own standards. It's not so much about competition. If we meet our standards, then the competition will pretty much take care of itself," he said. Bluecoats (6th, 89.80), Phantom Regiment (7th, 88.45), Boston Crusaders (8th, 88.40) and Blue Stars (9th, 87.50) have also been locked in close competition. "We want to create the most memorable show the Bluecoats have ever had and to completely break the barrier of drum corps," said drum major Eric Humbert Story. "In the end, we want to have a performance that people are going to love." Unlike the frequent shifting going on at the very top of the rankings during the Southern Series events, the middle of the competitive pack has stayed somewhat consistent over the last few days. Blue Knights (10th, 85.65) and the Glassmen (11th, 85.30) kept a slim margin between themselves as the corps improved upon scores they earned Friday in Murfreesboro, Tenn. and Gadsden, Ala. 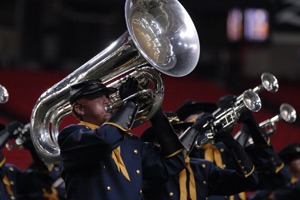 Troopers
Performing the 2009 program, "Western Side Story," America's Corps, the Troopers (12th, 83.30), is utilizing a repertoire equally recognizable to fans as the corps' yellow kerchiefs. This season is shaping up to be a banner year for the corps as its members rise through the World Class rankings. Third-year snare drummer, Jonathon Coppinger said that the Troopers' 2009 production is a great fit for the corps. "We feel like our show isn't just a gimmick," he said. "It's something that people can really connect with. We feel like we can really get into the show ourselves, and that makes it really easy to get the crowd into the show as well." Formerly based in Atlanta, Spirit (16th, 79.60) enjoyed the benefits of having, in effect, two hometowns, as the corps' numerous alumni came out to support the corps. Drum major Lauren Lingerfelt said, "The crowd was great. They started cheering as we came out of the gate and were energetic the whole time. We also got a great response at the end of the show." 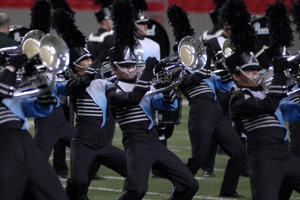 Spirit
The Mandarins (18th, 76.60) have been one of a handful of corps who have recently been dealing with illness. Drum major Santiago Sabado said the corps had a rough week as many members, including himself and fellow conductor David Mori, had to sit out of rehearsals and shows. "Everyone who was out sick came back strong for tonight's performance, Sabado said. "Once we started getting everybody out of 'sick bay' and getting our medicine taken care of, I think we came back much stronger than where we were before," he said. Colts (13th, 82.50), the Academy (14th, 82.15), Madison Scouts (15th, 79.95), Crossmen (17th, 79.40), Pacific Crest (19th, 75.45), Jersey Surf (20th, 73.90), Pioneer (21st, 71.70) and Cascades (22nd, 71.65) rounded out the World Class competition in Atlanta as each corps finalizes program changes and works toward the DCI Eastern Classic in Allentown, Pa. on Friday, July 31 and Saturday, Aug. 1. 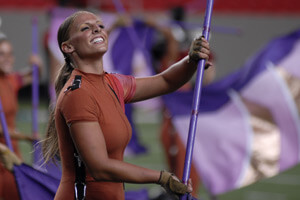 The Academy
Academy executive director Mark Richardson said his corps is improving at a great rate now that the corps has been comfortable in their "shoes" for a few weeks. He said all the corps are in the same boat when it comes to the final leg of the race to the '09 World Championships in Indianapolis. "The corps around us are doing a phenomenal job and of course there is a pack of corps that are vying for this 12th spot and trying to get into the Saturday night Finals, just like us," he said. "Their staffs and students are focusing on the same thing, not necessarily on beating another corps, because that's a distraction. We need to focus on getting our drum corps and our production better." View a complete recap of scores from this event.