Florida in all of its heat and humidity didn't deter thousands of drum corps fans from descending on the Citrus Bowl Saturday night, to witness 10 top Open and World Class corps compete during the DCI Orlando Premier Event. Turning a page in the history books, Carolina Crown surpassed the Cadets for the first time ever, taking the gold medal with a score of 85.625 and notching a victory unlike any other in their 18-year history. 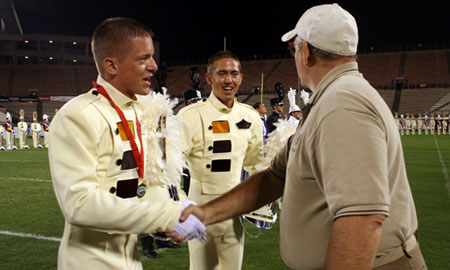 Carolina Crown drum majors Mark Whitfield (L) and Evan VanDoren
receive the gold medal at the Orlando Citrus Bowl.
Carolina Crown executive director Kevin Smith could be found after the show by the corps' buses, giving hugs and high-fives to a long line of corps members. Crown members were jubilant tonight, and supporters passing by leant their own calls of congratulation to the atmosphere. Smith beamed as he said, "This is a pretty big night for us. To win a big weekend show like this and to do it over a great corps like the Cadets with all of their history is just amazing." The audience has continued to feed the energy of Carolina Crown all season, and Smith said, "We've been getting great reactions from the start. The guys on the design team did a tremendous job putting this show together after a really great program last year. You never know whether you're going to be able to top the one from before, but it's really going great. The crowds are loving it and that's what we care about." The Cadets certainly kept the contest close, and with their score of 85.125 were exactly half a point behind Crown, earning their share of top placements from the judges. The Bluecoats, bronze medalists with a score of 82.550, took first in the percussion caption as the corps unveiled numerous changes to the way their program, "The Knockout," is staged. Saturday's finish was certainly special for Carolina Crown, but the Boston Crusaders will also be going on the road with some good feelings about their Orlando performance. The corps broke 80 points for the first time this season with a score of 80.675. Even before Crusaders members took the field to perform their program "NEOCOSMOS," the audience was cheering enthusiastically. The corps received a standing ovation as the strains of its traditional favorite piece "Conquest" rang through the stadium. 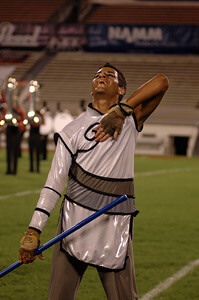 Boston Crusaders
Boston Crusaders drum major Alex Lopilato said after the performance, "That was one of the best shows I've ever been a part of with the Boston Crusaders. It was a great crowd, and there was great energy from the corps itself." Justine Williams, also a Boston drum major, said that for the corps, this was a hometown crowd, even far from the corps' Massachusetts roots. Williams said, "Half of those people were probably parents of the Boston Crusaders. This afternoon at rehearsal we actually had a little get together during our time to eat, shower and load. We had 250 people there and those people were out in the stands tonight." Lopilato added, "We've definitely reached a turning point this season where things are just starting to click, and I think people can tell that. 'NEOCOSMOS' is about a new world, new change, and that's what we're trying to do with the Boston Crusaders." Gaining momentum with their Tour de France-themed program, the Blue Stars (5th, 77.500) narrowly passed the Glassmen (6th, 77.175). The Colts (7th, 75.300), Spirit (8th, 74.475) and the Crossmen (73.525) rounded out tonight's World Class competition. In the Open Class, Jacksonville, Fla. based Teal Sound was the sole competitor and received a score of 73.175. Tonight's contest, in addition to competitive thrills, was packed with additional excitement for audience members. A family of four won a set of AeroBed stadium chairs, other attendees of the DCI Orlando event won free subscriptions to the DCI Fan Network and to "Big, Loud & Live 5," the cinema broadcast of the World Championship Semifinals coming to movie theaters on Thursday, Aug. 7. Youth from the local Boys and Girls Club were introduced to members of the Blue Stars during intermission, getting to meet some of the performers on the field up close and to see them demonstrate their instruments. With intense competition tonight in Orlando and Denver, things will only get hotter as corps head deep into the heart of Texas next weekend for the DCI Southwestern Championship in San Antonio, Texas. For the first time this season, fans will get to see all of the World Class corps compete head-to-head, and will get an idea of where everyone stacks up competitively as the season heads into its final weeks. Tonight's results from Orlando prove that fans will have to be in Bloomington this August, as 2008 is another season where the unexpected is just around the corner.