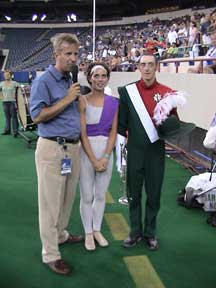 Dan Potter (left) at work
We see him at the DCI regional contests. We hear him interviewing corps members after their performances. But who is Dan Potter?^Dan has an extensive background in drum corps. He was drum major of the Geneseo Knights from 1979 through 1981, and worked on the visual staff of Glassmen when the corps was still competing in Division III.^He has worked at a Fort Worth, Texas news talk radio station since 1988. He announces many Texas and BOA marching band contests. Dan has announced at DCI shows since 1991. He states, "Announcing shows gives me an opportunity to stay connected with friends I've had for 25 years, and to still perform ... in a way. It allows me to combine what I do for a living with what I love."