From the Blue Devils' Web site: In America in the 1920s, popular culture abandoned prescribed steps from the Victorian age and embraced dances that encouraged improvisation, syncopated body rhythms, and self-expression. It was the whirlwind age of jazz when the latest fad was sure to create a frenzy. When Miss Alma Cummings danced an astounding 27 hours, simple hourly contests of dance endurance quickly became entertainment spectacles known as the dance marathon. 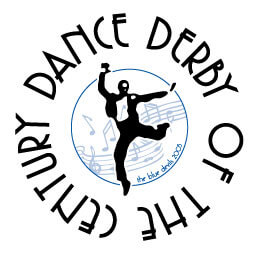 In the 1930s the Depression cast a dark shadow, and the marathon blended the theatre of fiction with harsh realities of daily existence. The 1935 novel "They Shoot Horses don't they?" by Horace McCoy exposed the endurance amusement craze as a desperate drama of survival. Depression-era marathons were an amalgamation of social dance, popular music, theatre and sport. Body style and movement were borrowed from vernacular dance; jazz rhythms came from popular music; and from sports came competition, and the concept of the fan. Scenes from dance marathon days (and nights) inspire the 2005 Blue Devils production of "Dance Derby of the Century." Named after the successful Madison Square Garden marathon of 1928, the Blue Devils take an adventure from end to beginning. A mosaic of musical and movement styles diverge to create an emotional landscape of entertainment and endurance. Nostalgia comes face to face with contemporary performance as the Blue Devils bring their unique perspective to this dramatic page in history. Musical Selections for the marathoners include (but are not limited to):
"Redline Tango" by John Mackey
"Brother, Can You Spare A Dime" by Jay Gorney and EY Harburg
"Prelude, Fugue & Riffs" by Leonard Bernstein
"On The Town" by Leonard Bernstein
"In Wartime" by David Del The show will also include a variety of dance music. Read more.