Saturday, June 23 marked the first time in two days that the Blue Knights were able to complete their rehearsal blocks and do a full run through of their show before heading off to a perform their 2007 program, "Dark Dances," in Rockford, Ill. Before arriving to their housing site in Winnebago, Ill., the corps faced cancelled rehearsals, a rained out show and severe weather while staying in Iowa. "It's been an interesting past few days," said Blue Knights color guard member Erica Huizenga. After rehearsals were cut short on Thursday due to the weather, the Blue Knights decided to try their luck on Friday. While unpacking equipment outside in the afternoon, tornado sirens went off and the guard was directed to move indoors with the rest of the corps. 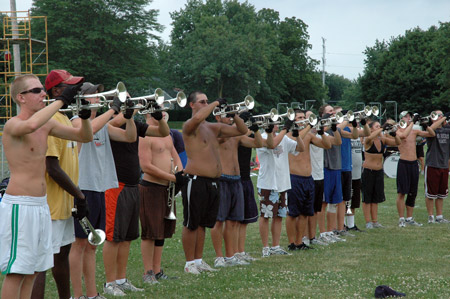 The Blue Knights rehearsed at Winnebago High School on Saturday, June 23.
"I was in the gym putting my shoes on to go outside and then I heard the tornado sirens," said color guard member Kristine Thompson. "Everyone started running back inside saying, 'Tornado sirens! Tornado sirens!'" When the members arrived inside the building, the staff rounded them all together for a head count to make sure everyone was safe. "We had 135 people crammed into one hallway near the locker rooms. The staff members were telling us to move toward the center of the building and stay away from the windows," said color guard member, Lauren Rosier. After 20 minutes, the sirens were silenced and the corps was redirected to the school's gymnasium. With their sleeping bags, suitcases and equipment, members continued to spin, stretch and practice inside as they waited out the rest of the storm which left them unharmed. This Saturday evening's run through was a great relief and accomplishment for The Blue Knights. Afterwards, the corps ate dinner outside in the parking lot again without worries; their only weather risk now being a possible sunburn.