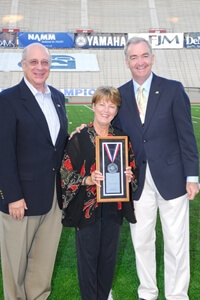 MENC's Dr. John Mahlmann and Barbara Geer
with DCI Exec. Director Dan Acheson
Drum Corps International and MENC: The National Association for Music Education, announced an exciting new partnership at the DCI Salutes America event last Saturday, part of MENC's inaugural convention, Music Education Week in Washington D.C. The convention gave important policy makers and convention attendees alike the opportunity to experience drum corps and explore the benefits of music education. According to Dr. John Mahlmann, executive director of MENC, the purpose of having this year's convention in Washington was to make a point to national politicians who have a hand in developing policies that affect the survival of music in the schools. Holding the convention in Washington also allowed MENC to take advantage of a unique collection of area resources, such as the premier music organizations of the armed forces. While in town, convention-goers heard the United States Air Force Band, as well as the President's Own United States Marine Corps Band, which performed at the Lincoln Memorial along with students from across the country. Drum Corps International's Glassmen joined MENC conventioneers for a rally at the Department of Education, where MENC presented the Secretary of Education with a petition to preserve music in schools with more than 120,000 signatures. Actress Florence Henderson, basketball player Kareem Abdul-Jabbar and "Funky Winkerbean" cartoonist Tom Batiuk joined the assemblage, as well as Mrs. America, whose organization has its primary focus on music education. The event received lots of press and compelled the Secretary of Education, Arne Duncan, to pay attention to the concerns of MENC. According to Mahlmann, "MENC and DCI both spell 'quality.' DCI is the major league of marching music and we're the major league of education." MENC has become the official education partner of DCI, broadening MENC's outreach to parents, DCI fans and media. Mahlmann believes the partnership will help MENC reach out to young people who are considering a career in music education and encourage a broader network of allies in the battle to support music in the schools. Read the official press release announcing the partnership between DCI and MENC. As part of the partnership, MENC has commenced a joint project with DCI to develop basic standards for marching music activities. With its embrace of marching music, MENC is expanding to reach out to more students, recognizing there are many approaches to encouraging a lifelong enjoyment of music. Mahlmann attended the DCI World Championships in Bloomington, Ind. last year and said the experience exceeded his expectations. "It's not a casual relationship with music that drives these young people," he said. "They obviously love devoting the time, energy and resources required in their pursuit of excellence. It's a tribute to the school music programs that stared them out in music and the teachers in those programs who instilled in them the love of music. I understand many of the marchers pursue careers in music and music education in particular. We're all beneficiaries of that." Mahlmann further believes that the business community can take a lesson from the skills exemplified in drum corps members. "The teamwork of marchers working together and the skills they develop are what any business would kill for. They have determination, drive and a concern for the entire enterprise. If one person fails out there, it hurts them all. It's their community. They're all partners in performance." Barbara Geer, a choral music teacher, is the current president of MENC. She mentioned that MENC and DCI have been working toward a partnership for several years, and in partnering, MENC is looking forward to further raising the bar of music education and learning how other different genres can work together. She is particularly impressed by the discipline of the marchers, something "any teacher could use in their classroom." She was introduced to the drum corps activity when Santa Clara Vanguard rehearsed where she teaches, at East Forsyth High School in Kernersville, N.C. "I showed up to see them practice and was blown away. The day was unbelievably hot and not once did anyone shirk his or her responsibility. They were so determined to succeed. They wanted to make their show the best it could be. "I was impressed with how the different sections rehearsed separately, but with the same agenda, so when they got together they were all working for the same cause and knew which direction to proceed to make it happen. "I think these kids working so hard together are going to be assets to their communities, making a better society for all of us," she said. To find out more about MENC, check out the organization's Web site at MENC.org.