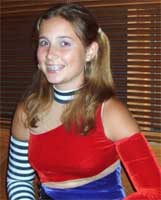 Allison Owen
This past Sunday morning, DCI World Championships finally aired on PBS in my area. Needless to say, I was really looking forward to seeing what an entire summer of hard work by each corps had produced. I couldn't wait to see these incredible performances. As I watched the shows I imagined how amazing of an experience finals was for the corps members -- and the audience as well. It was exciting to see how a season of blood, sweat and tears all culminated into this one final breathtaking performance. I am still in awe ... and I know that, given the opportunity, there is nothing else I'd rather do during my summer. At the end of each clip of the top 12 corps' show, as I saw all the smiling faces of the members who had just given it their all (some for the last time), I came to the full realization that no performance with my high school marching band could ever give me the thrill that marching with a drum and bugle corps in World Championships on finals night could. Knowing that marching in a drum and bugle corps would be the most intense and amazing experience of my life only makes me want to work harder to accomplish my goal and march a drum corps. Since there are many factors for choosing a drum corps to audition for -- especially since I'm still in high school -- my parents and I will be checking out all the options this week and deciding where I'll be auditioning this fall. So check back next week to find out the decision. Now I think I'll go watch that drum corps broadcast again ... thinking of how amazing it would (and hopefully will) be to march alongside my heroes, the members of the Division I drum and bugle corps, in the DCI World Championships. Allison Owen is a sophomore at Science Hill High School in Johnson City, Tenn., who plans to audition for a corps in November. "I'm in the SHHS guard and I like writing, dancing, performing, traveling, photography and having fun. As for after high school/college, I don't know what I want to do ... I just know I would like to do something dealing with color guard, computers or writing," Owen said.