DCI writer Michael Boo, revered for his weekly "Fanfare" columns on DCI.org, will take a two-week tour with the Windiana concert band this summer in early June. Boo, who holds a bachelor's degree in music education and a master's degree in music theory and composition, spends much of his time aside from his duties as a regular writer for Drum Corps International composing music. He was recently picked up by TRN Music Publishing, and his first composition, "Variation Suite" (a Grade 3 concert band selection) is being released this coming week. Among featuring band compositions by prominent American and Chinese composers, Windiana will premiere four China-inspired works by Boo titled "Visions of Xi Hu," "Spirit of Jasmine Flower," "Shenzhou Fanfare" and "Song of Jigong." Read more about the scheduled trip on www.valpo.edu. 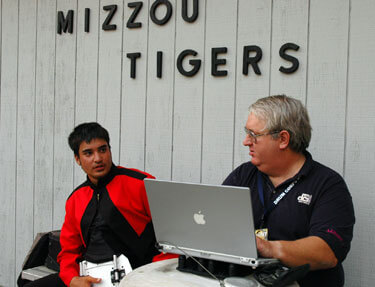 Michael Boo interviews a member of the Kiwanis Kavaliers in Colubmia, Mo. in 2005.