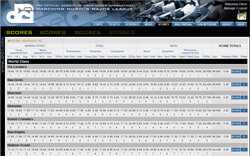 View a complete recap of scores.
As a reminder: When reading about the recaps, please be aware that General Effect (GE) Visual and GE Music are the only two captions that are not divided in half prior to their addition to the final score. When listing those other caption scores, the undivided score is presented first, followed by a slash and the divided score that is added to the total score for each corps. This was the third competition weekend that used an 11-person judging panel, with the addition of an additional judge on both Visual Effect and Music Effect. Only half the DCI World Class corps were in competition at this show. The other half will compete on Saturday, Aug. 2. This is the last show where many of these corps will meet prior to the World Championship Quarterfinals. Big news out of Alllentown was that the Cavaliers snapped the Blue Devils' undefeated streak. The Cavaliers had been slowly creeping toward the defending World Champions over the past two weeks and were 0.75 behind BD last weekend at the DCI Southeastern Championship in Atlanta after being 1.40 behind in San Antonio two weekends ago. Being 0.25 ahead at this show represented a 1.00 point reversal from last week. The Cavaliers (1st, 95.900) won on seven of the judges' sheets, while Blue Devils (2nd, 95.650) won on the sheets of three judges. The Cavaliers won Effect Visual 1, Effect Visual 2, Effect Music 1, Effect Music 2, Visual Performance, Music Ensemble and Percussion 2. Blue Devils won Visual Ensemble, Color Guard and Brass – three captions it won at the both the big regional events the past two weekends. Bluecoats won on the sheet of the remaining judge, Percussion 1. A Cavaliers advantage over Blue Devils of 0.25 in Effect Visual and 0.15 in Effect Music accounted for a 0.40 spread in total Effect between the top two corps, more than the overall spread of 0.25. The next highest spread was in Visual Ensemble, in which Blue Devils enjoyed a 0.40/0.20 advantage over the Cavaliers. All other captions were closer. The 0.25 spread between the two top corps was 19.4 times greater than the 4.85 spread between Blue Devils and 3rd place Bluecoats. It truly is a tight race between the Cavaliers and Blue Devils heading into the World Championships, but Saturday's show will certainly present claims of possible supremacy of its own, since Phantom Regiment was only 0.40 behind the Cavaliers in Atlanta a week ago and Carolina Crown had beaten Phantom in San Antonio, one week prior to Atlanta. Blue Devils took 3rd in Percussion 1, but tied with Bluecoats for 2nd in total Percussion, 0.30/0.15 behind the Cavaliers. The corps was 0.40/0.20 ahead of the Cavaliers in Visual Ensemble and 0.30/0.15 ahead in Color Guard, while being just 0.10/0.05 behind in Visual Performance, winning total Visual by 0.30. But that 0.30 deficit in Percussion and the 0.40 deficit in total Effect was too much for the corps to sustain its undefeated streak. Bluecoats (3rd-90.800) was 3rd on nine of the eleven judges' sheets, taking 1st in Percussion 1 (in the stands) and 5th in Color Guard. The Color Guard score was a full 2.00/1.00 under Blue Devils' winning color guard and was also topped by the Cavaliers (2nd), Blue Knights (3rd) and Glassmen (4th). In Atlanta, Bluecoats' guard had come in 11th. Other Visual captions were separated from the higher placing corps by fairly large margins as well. The spread in Visual Performance was 1.40/0.70 under the Cavaliers' 1st place score and that of Visual Ensemble was 1.80/0.90 under Blue Devils' 1st place score, helping account for the total Visual deficit of 2.25 to the Cavaliers and 2.55 to Blue Devils. The Bluecoats were 1.65 under Blue Devils in total Effect and 2.05 under the Cavaliers, most of that coming in Effect Visual, which was 1.35 under BD and 1.50 under the Cavaliers. The tie with Blue Devils for 2nd in Percussion was the corps' highlight, coming in 3rd in Percussion 2 (on the field), but taking 1st in Percussion 1. The spread between 4th and 6th place was just 0.45. Glassmen passed up both Boston Crusaders and Blue Knights, two corps that had finished higher in Atlanta. Six days earlier, Boston was 1.325 ahead and the Blue Knights were a full 4.150 ahead, representing a massive surge for the Glassmen. With the closeness of the scores between these three corps, this has suddenly become one of the more intriguing races to watch in the final week. Glassmen (4th, 86.650) ranged between 4th and 6th on the judges' sheets, gaining 4.85 from its score in Atlanta. In comparison, Boston Crusaders gained 3.225 and Blue Knights advanced just 0.25. Glassmen outscored its two closest corps in Effect Visual, Visual Performance and Color Guard and tied for 4th with Boston in Effect Music. The corps was down to Blue Knights 0.60/0.30 in Percussion. Boston Crusaders (5th, 86.325) took 4th in Brass and Music Ensemble and tied for 4th with Glassmen in Effect Music. A 7th place finish in Visual Ensemble was the corps' lowest finish. All other captions were 5th or 6th, mostly exchanging positions with the Glassmen and Blue Knights. Blue Knights (6th, 86.200) took 3rd in Color Guard, beating the Bluecoats, Glassmen and Boston Crusaders in that caption. The corps placed 4th in Visual Ensemble and Percussio, and no caption placed lower than 6th, with Effect Visual and Brass in 5th. The Madison Scouts (7th, 84.425) were 7th in all captions except Visual Ensemble, in which the corps placed 5th, outscoring both the Glassmen and Boston Crusaders. Troopers (8th, 80.075) were 8th in all captions except for 10th in Color Guard, tying for 8th with the Mandarins in Effect Visual. The Academy (9th, 78.025) was 9th or 10th in all captions. Mandarins (10th, 77.600) took 8th in Color Guard and tied for 8th in Effect Visual, were 9th in Visual Ensemble and Brass and 10th in all other captions. Jersey Surf (1st in Open Class, 85.875) took all captions over Beatrix (2nd, 77.770).