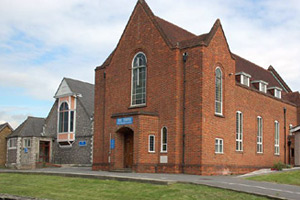 The Pacemakers Drum Corps' headquarters in St. Mary Cray
near of London will be the site of the 2010 DCE Symposium.
Staff, directors, judges and other officials of Drum Corps Europe (DCE) will gather in London on Saturday, January 30 for the 2010 European Drum Corps Symposium. Similar to Drum Corps International's Annual Meeting, the symposium is an off-season gathering of the European drum corps community for general business meetings and development workshops. "Our symposium is meant to bring the European corps together to evaluate last season and talk about the future of drum corps," said Dennis Naaktgeboren, public relations manager for DCE. "As Drum Corps Europe, we want to hear what they think of the way things are going. All subjects can come to the table; judging, rules, events, etc." DCI Executive Director Dan Acheson will be in attendance at this year's DCE Symposium. A previous guest of Drum Corps Europe at the organization's 2006 World Championships in Rotterdam, The Netherlands, Acheson has been invited to this event by DCE Executive Director Marco Janssen to deliver a presentation as part of the main "Board and Organization" session. He'll have the opportunity to give a general overview of the developments and current initiatives of Drum Corps International, while engaging with other DCE officials in discussion on the worldwide scope of the drum and bugle corps activity. "It's a real pleasure to have the opportunity to meet with so many of our European counterparts at one event," said Acheson. "We enjoy frequent visits from European corps to the DCI World Championships, and we welcome every chance we get to share experiences and learn from one another." Ten European corps will be represented at the meetings including Jubal (The Netherlands), Senators (United Kingdom), Beatrix (NL), Dagenham Crusaders (UK), Pacemakers (UK), Liberty (UK), Distant Thunder (UK), The Company (UK), Juliana (NL) and the Staffordshire Knights (UK). Learn more at DrumCorpsEurope.org.