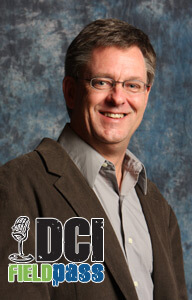 Greg Orwoll
In today's Field Pass, Dan Potter catches up with Colts executive director Greg Orwoll, who is one of four individuals named as members of the Drum Corps International Hall of Fame Class of 2008. For nearly 40 years, Orwoll has been involved with the drum corps activity as a member, instructor and director. As he has done since the early 1980s, Orwoll continues to lead the Colts with a genuine demeanor and steadfast commitment to youth that has helped grow the organization into a pillar of its hometown Dubuque, Iowa community and to Drum Corps International as well. Download and listen. (MP3, 13.4 MB) Subscribe to this podcast through iTunes. Subscribe to this podcast. Check out the Field Pass archive.