From Major League Baseball umpires to ballroom dancing judges, every year organizations around the world hold clinics and conferences to prepare veteran and new evaluators for a fresh season of competition. This is what Drum Corps International will accomplish on Friday, June 2 and Saturday, June 3, when more than 95 of the 120 members of DCI's judging community convene in Chicago for the sixth annual DCI Judges Clinic. The Judges Clinic has become a yearly opportunity to bring all Drum Corps International judges together prior to the start of the competitive Summer Music Games Tour. As an official pre-season training camp, various presentations, discussions and clinic sessions will be held to put judges on the same page related to the philosophy and administrative aspects of the DCI judging system. "Typically, the judges are thrilled with the opportunity to come together before the season and reacquaint themselves with the system we use in DCI competitions. After the fall and winter, they are able to refresh and begin thinking again in terms of evaluating drum corps as opposed to the types of evaluations they regularly use during the off-season with their students in home music and visual programs," said DCI judge administrator John Phillips. 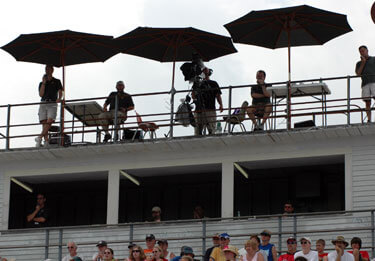 DCI judges from the pressbox at the 2005 Division II&III Championships in Brockton, Mass.
Phillips said among the focuses of this year's clinic will be performer achievement, general effect and the physical demands and environmental responsibilities performers go through in presenting their shows. "I'm excited because we have a range of presenters which include members of the judge administration team, the DCI task force, current and former judges, as well as a few special guests," he said. Of note during this year's clinic will be a presentation by a guest artist who will discuss how to evaluate vocal music and examine the specific characteristics of singing. In recent years, vocalization has become a hot-topic in drum corps with the increased incorporation of amplification into corps' programs. Another session will center on judging all-age corps who this year--for the first time--will be evaluated by DCI judges according to Drum Corps Associates (DCA) rules and criteria. "Importantly during these weekend sessions, we have moved from a 'sit-and-get' presentation format, to engaged participation where everyone's voice is heard in round table dialogue that focuses on a specific topic," said Philips. For DCI fans across the world, this clinic session means that as judges file out Saturday evening to catch planes back to more than 25 states and Canada, another season of DCI competition will be primed and ready come the very first competitive event scheduled for June 16. "When the judges leave this meeting they will have the information they need to achieve excellence in what they do, while demanding the same of each corps member that stands before them this season," said DCI executive director Dan Acheson. "Most of all, they will be reminded that they play an integral part in the drum corps experience as teacher, counselor, critic and that above all, they are there to serve the performer."