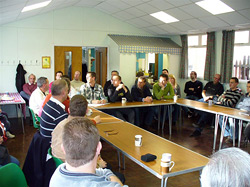 In response to the organization's continued growth, Drum Corps Europe (DCE) held an educational symposium for all of its corps and instructors in London the last weekend in January. This is the second time in four years this symposium has been held.

"It is so exciting to see this growing organization blossom," said Bob Thomas who in addition to judging for Drum Corps International in the summer, serves as the DCE director of education. "The cooperation of corps from all countries is exhilarating. DCE has prided itself in providing a fair system for all participating groups, no matter what their size or experience level. Drum corps fans all over the world should know that drum corps is alive and well in Europe."

The main focus of the meeting was on the DCE adjudication system. As a way to facilitate its continued development, an instructors task force has been created. Headed by Robby Overvliet, also a Drum Corps International judge, the task force will collect feedback from the corps to address any issues and concerns related to the adjudication and scoring system. The DCE adjudication team will then use that input as a way to make informed decisions that are most beneficial for the participating corps.

"We are going to celebrate Drum Corp Europe as an organization that is growing and securing its place in history," said Thomas. "The education committee is looking forward to working with the task force to improve the drum corps experience for all participants."

Drum Corp Europe and its certified partners Drum Corps United Kingdom and Drum Corps Netherlands will hold nine contests this year. Twenty-one top corps will compete at the DCE Championships on Sept. 26 at the Parkstad Limburg Stadium in Kerkrade, the Netherlands.