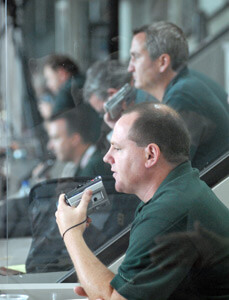 Judges look on from the press box.
What exactly are the green-shirted judges fans see on the field and up in the press box during a Drum Corps International event judging? What do they look for and analyze? How they decide on a score for a particular caption? This explanation looks to help demystify the adjudication process and in most cases applies to both the Open and World Class judging sheets. There are two sub-captions that are evaluated on each sheet, listed below in capitalized letters. The numbers each judge marks on his or her own sheets are then submitted and tabulated along with all other judges to come up with a corps' final score at each event.
In addition to the sheets, each judge provides a tape of commentary for each corps, recorded live throughout each performance. The commentary on each tape goes into extensive detail, explaining in real time what the judge is witnessing as each corps performs. The tapes serve to express the logic behind the scores the judges give to each corps, as well as to give the instructors and designers extensive feedback on the nuances of each show. This is just a basic overview of the judges' responsibilities as required on each particular judge's scoring sheet.
VISUAL EFFECT 1 This judge sits in the stands and asks if the visual program is being "sold" to the audience. Are the drill formations, movements and evolutions and the choreography of the movement, dance and other maneuvers easy to "read" and do they create an emotional impact? In EFFECTIVENESS OF THE REPERTOIRE, the judge gives a score based on how well the visuals interpret the musical program. In EFFECTIVENESS OF THE PERFORMERS, the judge considers how well the marching members convey their product to the audience.
VISUAL EFFECT 2 This judge sits in the stands and isn't added to the judging panel until later in the season for World Class events. They use identical sheets as the Visual Effect 1 judge. 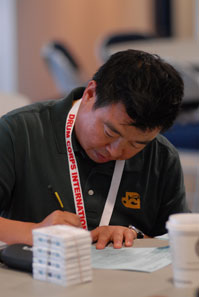 Music judge Albert Lo fills out
comments on his judging sheets.
MUSIC EFFECT 1 This judge sits in the stands and considers how successfully the performers "sell" their musical program (the "book") to the audience, including a consideration of the emotional impact of the presentation. EFFECTIVENESS OF THE REPERTOIRE essentially considers how well the music flows, if the music delivers maximum impact and if it is adequately sophisticated. EFFECTIVENESS OF THE PERFORMERS is all about how well the performers communicate the music to the audience, and if the music is paced well, with a right amount of ups and downs to keep things interesting.
MUSIC EFFECT 2 This judge sits in the stands and is added to the judging panel later in the season for World Class events. They use identical sheets as the Music Effect 1 judge.
VISUAL PERFORMANCE Sometimes referred to as the Field Visual judge, this is one of three judges that fans will see running around the field during a corps' performance. They reward marchers for their ability to perform their drill formations and choreography while playing the music. MOVEMENT AND EQUIPMENT: TECHNIQUE AND TRAINING is where credit is given for the performers being trained to handle their movement demands and how well they march their drill formations. Are they in step and in the right place? Do they exhibit a uniform marching style throughout the corps? EXCELLENCE OF FORM, BODY AND EQUIPMENT is where the judge considers the difficulty and variety of what the marchers are doing and if the marchers are conveying the music through the movement.
VISUAL ENSEMBLE This judge sits in the stands to better observe the excellence of how the corps members march during a performance. The judge also rewards the design team for creating a show where the music and visual program work as a single entity. THE COMPOSING PROCESS is where the judge analyzes if the visual program is logical, if the forms evolve from one to the other or if they appear to be just thrown together. Do the movements create excitement? Do the colors, the flags and even the props and sets make sense? ACHIEVEMENT OF EXCELLENCE AND TECHNIQUE is where the members are credited with demonstrating proper techniques to make the visual presentation clear. The judge also considers how well the visual program fits the music and if the program adequately challenges the members.
COLOR GUARD This judge sits in the stands to better see the entire color guard and to reward the guard members for conveying their program to the audience. Do the routines fit with the music? Are the routines challenging and is the guard succeeding in accomplishing the program they are given? PROGRAM CONTENT: OVERALL VOCABULARY looks at if the guard exhibits a wide variety of techniques throughout the show and how well the members use their bodies and equipment to convey the mood of the music. Do they enhance or detract from the music? Are they staged well and do they behave as a single group when needed, but individuals when required? How well are they used in the overall design of the show? ACHIEVEMENT THROUGH FORM, BODY, AND EQUIPMENT looks at how well the members demonstrate their training. Do they spin, throw and catch the equipment at the same time and with precision? Is what they are doing clear to the audience? Do they handle the challenges of adverse weather conditions (such as wind) well?
BRASS PERFORMANCE Sometimes referred to as the Field Brass judge, this is one of three judges that fans will see running around the field during a corps' performance. They award the horn line for good musicianship and technique. ACHIEVEMENT OF MUSICIANSHIP credits performers for superb music making, attention to the little things that make a performance extraordinary and attention to the proper musical style. ACHIEVEMENT OF TECHNIQUE credits the brass section for the quality of sound coming out of the horns, proper tonguing, smooth fingering and good intonation (playing in tune). The judge is largely looking for a uniformity of sound and technique.
ENSEMBLE MUSIC This judge sits in the stands to best hear how the musical elements blend and fit together. They focus on both the brass and percussion and how the two lines blend together as a drum corps and not just a drum line and a horn line. ACHIEVEMENT OF MUSICALITY focuses on how the brass and percussion take the notes and make them into great music, the very meaning of musicianship. Are both lines playing with the proper style for the music being played and do all the players comprehend what the overall sound should be? ACHIEVEMENT OF SOUND/TUNING/TECHNIQUE rewards the clarity of a good ensemble sound and proper tone quality throughout the brass and percussion. The percussion instruments must be properly tuned for the best sound and the line must be balanced volume-wise with the brass. Control and quality of sound is quite important… no members should be sticking out when they are supposed to be blending together with all the other instrumentalists. 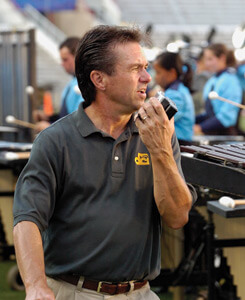 Percussion judge Allan Kristensen records
his comments from the field.
PERCUSSION PERFORMANCE 1 Sometimes referred to as the Field Percussion judge, this is one of three judges that fans will see running around the field during a corps' performance. They reward the battery (drum line) drummers and the front ensemble (pit) percussionists for good musicianship and technique. MUSICIANSHIP is concerned with proper interpretation of the music, whether everyone is playing together, and the presence of a uniform style in the battery and front ensemble. The drumheads must be properly tuned, the timpanist must be playing in tune and the keyboard players must know how to get the best sound from their instruments. QUALITY OF TECHNIQUE is more about the precision exhibited while playing the various percussion instruments. A uniform style is most important, as is accuracy from all members, as a judge is listening closely for any inconsistencies and tiny errors.
PERCUSSION PERFORMANCE 2 This judge sits in the stands and is added to the judging panel later in the season. They use identical sheets as the Percussion 1 judge. When utilized, their score is averaged with the Percussion 1 judge for the final Percussion score.
ABOUT CAPTION AWARDS And while we're at it, how are caption awards determined for the Drum Corps International World Championships? Caption awards are determined by averaging caption scores at the Quarterfinals, Semifinals and Finals events. BEST BRASS is based on the Brass Performance (Field) scores. BEST PERCUSSION is based on the Percussion Performance scores. BEST VISUAL is based on the Visual Performance (Field) scores. BEST COLOR GUARD is based on the Color Guard scores. BEST GENERAL EFFECT is determined by combining the Music Effect and Visual Effect scores from each of the three days, and averaging the three.