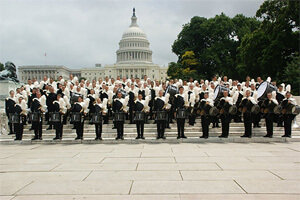 The Glassmen had the opportunity to participate in
MENC's inaugural Music Education Week in 2009.
Education has long been a focus for Drum Corps International groups and staff members (Nearly 60 percent of college-age corps members study music!). Thanks to DCI's growing partnership with MENC—the National Association for Music Education— the drum corps community now has an opportunity to help teachers improve and promote marching music education at schools around the country. In 2009, the two organizations assembled the Marching Music Blue Ribbon Panel of educators and professional musicians to help develop new National Standards for Marching Music Education. "The standards will be included as part of the National Standards for Music Education and will assist music educators and leaders in developing quality marching music education programs in their schools," says MENC Deputy Executive Director Earl Hurrey. The standards will cover three areas: musicianship; movement and aesthetics; and health and safety. They will be presented as part of a two-day event on June 25-26, coinciding with MENC's annual Music Education Week in Washington, D.C. (MEWW). The inaugural Marching Music Academy, presided over by DCI's Judge Administrator John Phillips, will include nine workshops, starting with the Blue Ribbon Panel's explanation of the Standards. "The purpose of the workshop is to support music education, to improve the understanding of the skills involved in teaching marching music," Phillips says. "We bring the experience and credibility that DCI has in the United States and internationally." Friday's classroom discussions will include such topics as marching design, music arranging, and guidelines for keeping marching musicians fit and healthy. "A big part of the workshops will be training in health and safety," says Phillips. On June 26, attendees will be presented with a live instructional session by the 2008 World Champion Phantom Regiment, which will focus on how to make better use of rehearsal sessions, both in small group and full corps settings. After a discussion on the educational uses of competition, teachers will have the opportunity to attend the DCI Salutes America Premier Event, featuring the Bluecoats, Boston Crusaders, Crossmen, Jersey Surf, Phantom Regiment, and Spirit. There, Marching Music Academy participants will get to assess the corps' on-the-field performances and compare their evaluations with the event's official scorekeepers. "We'll provide them with judges' sheets and afterward talk about how they scored in comparison with how the professional judges did," says Phillips. "I'm really excited about that." "MENC is nationally recognized as the most authoritative voice for music education," Hurrey adds. "And likewise, DCI is nationally recognized as the premier marching music organization. Together, we present a powerful alliance in support of quality music education programs for all." 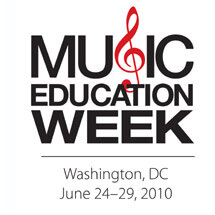