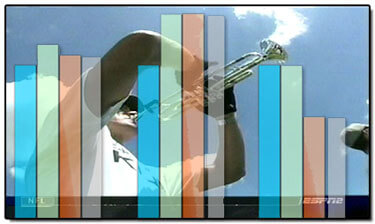 Audience measurement results provided by the network from the Sept. 5, Drum Corps International World Championship broadcast on ESPN2, show that more than 824,000 viewers tuned in for the two-hour broadcast.

The program received a .58 rating in this, the second year that Drum Corps International has aired its World Championship program on the ESPN2 network. According to Nielsen Media Research, the rating is based on the estimated percent of all TV households of persons tuned in to a specific program. One ratings point equals 1,102,000 homes. This year, households viewing the DCI broadcast were up from last year by more than 100,000—an increase of 23 percent from 2005.

"We are pleased to see a ratings increase for the DCI World Championship broadcast on ESPN2," said Executive Director Dan Acheson. "ESPN2 continues to provide an excellent platform for this program, as we continue to expand the Drum Corps International brand and open this window to a national viewing audience."

In addition to out-rating its showing from last year, the Sept. 5, DCI on ESPN2 program rated higher than the programming that preceded and followed it, including a SportsCenter special on Monday Night Football that received a .38 rating, as well as "Baseball Tonight" which received a .56 rating.

Compared to other sports programming, DCI outperformed the WNBA's regular and post season coverage on ESPN2 by a 3 to 1 margin and came close to matching its .7 average for six games on ABC. DCI ratings and audience also outshined this summer's Tour de France coverage on Outdoor Life Network, which averaged a .33 rating over 23 telecasts according to the Sports Business Journal.

A rebroadcast of the second hour of the DCI on ESPN2 program will be shown on ESPN2 this coming Monday, Sept. 18 at 1 p.m. Central time. Rebroadcasts are also scheduled for play on ESPNU in the near future.

"We have received a considerable amount of positive feedback on the program from both new and long-time fans which is invaluable as we continue to refine the broadcast and showcase the talent of these world-class performers," said Acheson.