This photo is from Cheryl Kelchner, aunt of Gregg Kerschner a former member of the Phantom Regiment. 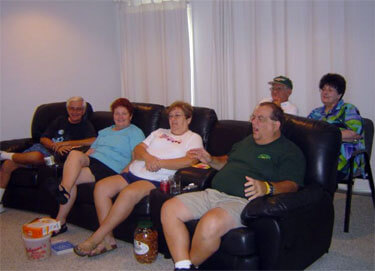 While on vacation at the Outer Banks, N.C., we got to take advantage of the house's 60" HDTV to watch the second hour of the TV broadcast of the DCI World Championships on ESPN2.

Randy (far right) and Colleen (second from left) Kerschner's son Gregg Kerschner marched with Phantom Regiment several years ago, so we were happy to see the corps' performance. After the broadcast, we sat and watched the DVD of his last year of marching in the World Championship Finals at Buffalo, N.Y.! It was a great afternoon.