It's been a long 303 days since the last drum corps note was cut off in Foxboro, Mass., at the 2005 DCI World Championships. Since then, fans have been waiting in anticipation for the rebirth of a new season. Some have spent their time following the corps' winter progress on the Internet, others may have visited off-season rehearsals, and some may have spent their time watching and reliving drum corps experiences on DVD. One off-season detail remains consistent: No one has seen a live junior corps competition since that hot and muggy Championship Saturday in Foxboro. This Friday, June 16, marks the official start to the 2006 season, and with that start comes the promise of a clean slate. Fans will be treated to new performances and new events, and competitive speculation from the winter will be put to the test as scores start rolling in for the new season. 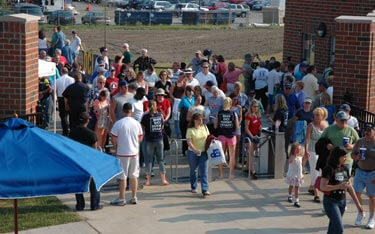 Fans pour through the gates at the DCI Father's Day Classic in Lisle, Ill.
"Everyone that has participated in drum corps remembers that feeling of unexplainable excitement that overwhelms you when you march onto the field for your first competitive performance. That excitement this opening weekend of 2006 will penetrate anyone in their wake as corps light up the field, staking their claim on what is sure to be an amazing ride for all involved," said DCI executive director Dan Acheson. "We have seen drum corps performances evolve over the past decade to the point where there is little doubt the corps will be on fire from day one. You can wait until the 2006 World Championships to see a show, but you will miss the journey. Be a part of this magnificent season, and get to an event this weekend or log on to follow the news." The 2006 Summer Music Games Tour kicks off this Friday in Oswego, Ill., with a Midwest showcase featuring the Cavaliers, Glassmen, Southwind, Pioneer and Capital Sound.

"Being in such a wonderfully rich drum corps market as Chicago, it's great to have the opportunity to inaugurate the season out here and get everyone excited about going to other shows," said Scott Nickles, the Oswego event's Tour Event Partner. "People will be ready to come out to the opening event, the first breath of spring, so to speak, and we're honored to be a part of it" The Oswego event will be the catalyst for a season of more than 135 sanctioned shows. Also during first week of competition will be Saturday events in Hayward, Calif.; Toledo, Ohio; Coon Rapids, Minn. and Orlando, Fla. Sunday will be the first Drum Corps International major event in Lisle, Ill., the DCI Father's Day Kickoff, featuring Phantom Regiment, The Cavaliers, Bluecoats, Glassmen, Pioneer and the Kilties. Other Sunday events will be showcased in Modesto, Calif., Menomonie, Wis. and Baldwin, Fla.