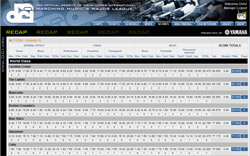 View the complete DCI Orlando recap.
Just a reminder: When reading about the recaps, please be aware that General Effect (GE) Visual and GE Music are the only two captions that are not divided in half prior to their addition to the final score. When caption spreads are mentioned below, those other than General Effect are first listed with the score given by the particular judge for that caption, followed by a slash and the half-value score that was added to the overall score. This is the first competition weekend that used a nine-person judging panel, with the addition of a second percussion judge. Now, one percussion judge is in the stands and the other is on the field, the two scores are averaged together for the final overall score. Without question, the biggest news to come out of the July 12 DCI Orlando event was Carolina Crown's first victory ever over the Cadets, by a margin of 0.5, 85.625 to 85.125. In looking at the recap of all scores, it becomes apparent that there was no glaring deficiency in the Visual or Music captions on behalf of the Cadets, nor any massive spread in those captions on behalf of Carolina Crown. Across all three Visual judges (Performance, Ensemble and Color Guard) and all four Music judges (Brass, Ensemble and the two Percussion judges), there was never more than 0.3/0.15 difference between the two corps in either direction. The 0.3 advantage for the Cadets in GE Visual was offset by a 0.5 advantage for Crown in GE Music. Of the nine judges' scores, Crown won four (GE Music, Visual Performance, Color Guard and Brass), Cadets won three (GE Visual, Visual Ensemble and Percussion 1) and Bluecoats won Percussion 2, in which the Cadets placed 3rd. (Bluecoats were 3rd on the sheets of every other judge.) The Cadets and Crown tied for 2nd in the averaged Percussion caption, just 0.05 behind Bluecoats, making Percussion the caption that appears to currently decide the order between Carolina Crown and the Cadets. Bluecoats (3rd, 82.550) finished 2.575 behind the Cadets, mostly due to third place finishes on the sheets of eight of the judges. About half of the overall deficit to the Cadets occurred in the Bluecoats' GE Visual and GE Music scores. In both captions, the corps was down to the Cadets by 0.6, for a 1.2 shortfall in overall GE. Also notable was a 1.1/0.55 deficit to the Cadets in Visual Ensemble and a 0.7/0.35 deficit in Music Ensemble. The Brass score hung in tight, ending 0.2/0.1 under Cadets and 0.4/0.2 under Crown. The brightest spot was that 0.05 advantage over the two top corps in the averaged Percussion score. Boston Crusaders (4th, 80.675) finished only 1.875 under Bluecoats, despite ending 4th in every caption. (The corps finished 5th in Percussion 1, but averaged 4th from both Percussion judges, that average percussion score being 0.95 under Bluecoats and 0.9 under Crown and the Cadets.) In GE Visual, the corps was only 0.1 down to Bluecoats, but 0.5 down in GE Music. Other than Percussion, in the non-GE captions, the corps was never more than 0.4/0.2 under Bluecoats. Blue Stars (5th, 77.500) came in 5th in GE Music, Visual Performance, Color Guard, Brass and Percussion, 6th in GE Visual and Visual Ensemble and 7th in Music Ensemble, the latter caption score being 0.9/0.45 under Boston. The 3.175 deficit to Boston came across the board, with a 0.8 deficit in GE Visual and a 0.5 shortfall in GE Music. Overall, there was only a 0.5 deficit across the three Visual captions, but being 1.3/0.65 down in Brass and 0.9/0.45 down in Music Ensemble was more dramatic. A 0.5 advantage for the Crusaders in Percussion sealed the corps' 1.375 gain over Blue Stars in the Music captions. Glassmen (6th, 77.175) held in just 0.325 under Blue Stars mostly as a result of tying in General Effect, and nudging the corps by 0.05 in overall Visual. However, Glassmen ended up 0.375 under Blue Stars in the overall Music captions, down 0.5/0.25 in Brass, up 0.4/0.2 in Music Ensemble and down 0.65 in averaged Percussion, the spread between the two corps in overall Music being greater than the spread in the overall score. Colts (7th, 75.300) finished 1.875 under the Glassmen largely due to a 0.9 deficit in overall GE and a 0.9 advantage by the Glassmen in overall Visual. While Visual Performance for the Colts was only 0.2/0.1 down, the corps was down 0.9/0.45 in Visual Ensemble and 0.7/0.35 down in Color Guard. The overall Music captions held in tight, just 0.075 under Glassmen. The corps' overall Percussion score bested the Toledo corps by 0.05. Spirit (8th, 74.475) finished 0.825 under the Colts by tying the corps in GE and finishing just 0.125 under in overall Music. The biggest difference between Spirit and Colts came in the 0.7 deficit in overall Visual, with the 0.5/0.25 spreads in both Visual Ensemble and Color Guard accounting for most of that. Crossmen (9th, 73.525) tied Colts for 7th in GE Visual, took 8th over Spirit in all three Visual captions and placed 9th in all other captions. Only 0.1 of the 0.95 shortfall to Spirit came from General Effect, with the corps besting Spirit by 0.3 in overall Visual. But the 1.30 deficit in averaged Percussion sealed the positions.