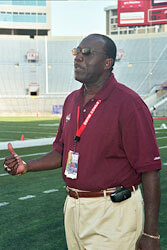 Harvey Wingo
Longtime Drum Corps International events staff volunteer and judge, Harvey Wingo passed away in his home on Sunday evening as a result of an apparent heart attack. Wingo, of Bellefontaine Neighbors, Mo., was a member of the Spirit of St. Louis drum corps in the early '60s and is remembered well by many for his charismatic demeanor and infectious smile which he shared while working at Drum Corps International events. In addition to DCI, he also is known for his volunteer and judging work with Winter Guard International, U.S. Scholastic Band Association, and the Illinois Drill Team Association, among other groups. A wake is scheduled for Jan. 21, 2008 from 4 to 7 p.m. Funeral services will take place on Jan. 22 at noon. Layne Renaissance Chapel 7302 W. Florissant Ave. St. Louis, Mo 63136 More about Harvey Wingo from WGI.org. Friends and colleagues, remember Harvey Wingo: Dan Acheson, DCI executive director Although Harvey's stature may have made him an imposing figure on the sidelines to some, those that knew him will remember his boundless passion for drum corps performers at every level of competition. He was a man of integrity, great heart, and possessed a great sense of humor. We will certainly miss his contributions to our events team, but will miss his friendship even more. Missy Berg, DCI event operations manager Harvey was always supportive of everyone around him. He was the type of guy that was always genuinely interested in how you were doing and what you were up to. He really cared for others. It was an honor to work with him on site at the events, and you could see the respect and admiration that all of the corps members, staff members and others had for him. Brandt Crocker, longtime DCI announcer We always had to laugh because if we traveled with two suitcases, Harvey traveled with six. His wife Lois dressed him well and he always gave her credit for it. He would open up the suitcase, put on his suit and then would select a watch and related jewelry to go with it. He must have had several different options to go with everything! We gave him a rough time and kidded him a lot, and he always had a great sense of humor about it. It'll be a tough year to get through looking around the field at the World Championships and all of sudden where Harvey is supposed to be on the front sideline, he's not. Tony Dicarlo, DCI contest coordinator Harvey was a great guy with a great sense of humor. He would always call as the season got closer with much excitement. He loved the excitement of competition, loved the members in all of the corps and always wanted to help out. Drum corps was his life. He had many friends and loved the camaraderie with his colleagues, judges and corps directors. Harvey would do what ever was needed during World Championships week, but he especially loved being the official timer for all of the corps. During the Championships he was so excited to be up and ready to go each day. As he would walk into the stadiums, you could just see the big smile on his face.