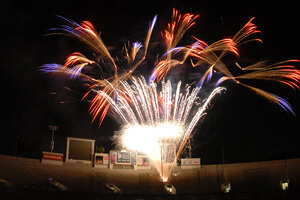 Food, fireworks, Fourth of July festivities … and to tie it all together, five top Drum Corps International units returning to historic Rose Bowl Stadium for a special patriotic performance!

Festivities run all day long, with food vendors, entertainment, crafts, exhibits and more outside the stadium during the afternoon. Tailgate or picnic while watching the drum corps warm-up before corps members suit up for their performances in the familiar confines of one of America's most historic stadiums.

Beginning at 7 p.m., fans will be treated to exhibition performances by the corps along with a special military tribute to America's armed forces. And just when you thought your star-spangled Fourth of July celebration couldn't get any more spectacular, the largest fireworks display in Southern California kicks off starting at 9 p.m.

With thousands of residents from all over California in attendance for this annual Rose Bowl spectacle, a special reserved seating block has been set aside just for Drum Corps International fans specifically for the event.