"The educators in this session with whom we'll be speaking already know how to teach in the classroom," said Gary Doherty, executive director of OnQ Performance Education. "From a motivational standpoint, we want to discuss with them the benefits of being involved with highly-successful competitive groups." Presenting the session in collaboration with OnQ will be John Madden, MSU College of Music Associate Professor of Music, Associate Director of Bands and Director of the Spartan Marching Band. Madden's drum corps background includes marching (1983-1984) and instructing (1985, 1990-1992) as a member of the Phantom Regiment of Rockford, Ill. This past August, Madden served as a member of the broadcast team for the 2007 DCI World Championship "Big, Loud & Live" cinecast. 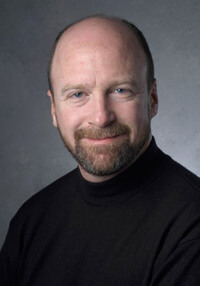 John Madden
Doherty says that the session will focus on the lives of two Drum Corps International drum majors, Evan VanDoren of Carolina Crown and Mike Huebner of the Bluecoats, who will share with Madden and educators in the audience how their experience as members of competitive world-class drum corps organizations relates to their lives beyond the boundaries of competitive performance. Official program materials describe the session as: "Achievement as a Lifestyle': Performance at the highest levels of musical an artistic achievement move us to life-long patterns of discipline, excellence and positive socialization. Music Education, as a process, imprints achievement in our psyche, in our ego and in our collaborations with others." Founded in 1907 with 64 members, MENC membership has grown to more than 130,000 including active music teachers, university faculty and researchers, college students preparing to be teachers, high school honor society members and MusicFriends. Formerly called the Music Educators National Conference, the association's name was changed in 1998 to MENC: The National Association for Music Education to better reflect its mission. The session will take place at the Midwest Airlines Center Ballroom AB on Thursday, April 10 at 2 p.m. CT. www.MENC.org www.onq.org