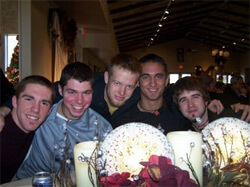 The weekend of Dec. 14, more than 200 brass players, percussionists, and color guard performers from around the world attended the Crossmen December audition camp at Ronald Reagan High School in San Antonio, Texas. This weekend marked the third round of auditions for the Crossmen, after holding two successful "experience camps" in November. Many veteran members of the corps also returned to San Antonio for their first camp of the 2008 season, and to celebrate the past year at the corps' awards banquet on Sunday afternoon.