Submitted by Teal Sound: Teal Sound held its first full rehearsal camp of the year last weekend in Jacksonville, Fla. "I think everyone is blown away by the turnout of students, the horn sound this early in the season, the groove the percussion section has found and the high level of intensity and quality the color guard is showing. The corps should be well over the 100 member mark this year and very close to a full-size corps," said Teal Sound corps director Randy Blackburn. At that camp, the corps announced its drum majors for the 2007 season. Bobby Duncan, who will be returning for his second year as Teal Sound drum major, is a senior at Lee County High School in Albany, Ga. 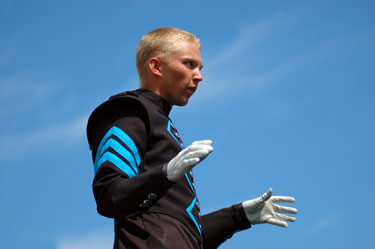 Bobby Duncan will return as one of Teal Sound's drum majors in 2007.
Kayla Swift is entering her first season with Teal Sound and comes to the corps from Oviedo High School in Oviedo, Fla., where she is a senior. Swift has been the drum major of the Pride of Oviedo for the past two marching band seasons. Jordan Lindsley returns in 2007 as a field conductor after taking a year off while undergoing surgery for a rare genetic disease. He resides in Baton Rouge, La. "These three individuals have shown an excellence in leadership that all of us here were looking for to take this corps into the future. We feel that Bobby, Kayla and Jordan all have the character and charisma to set a positive and professional example to the membership while representing the Teal Sound family in its day-to-day activities," said Brian Fisher, Teal Sound's assistant director.