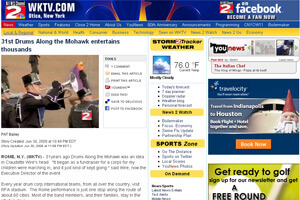 31st Drums Along the Mohawk entertains thousands The Drums Along the Mohawk event was the feature of this WKTV news broadcast from Utica, N.Y. The show, which began as a fundraiser, is now in its 31st year and welcomed about 3,000 fans and six drum corps to the RFA Stadium on Tuesday. Read or watch the broadcast about the show and the dedicated parents who make the event and summer tour possible. Read the wrap-up on WKTV.com. Go directly to the broadcast.

Troopers Tuesday: Scores improve over first five shows Get caught up on how the Troopers are doing this season with this comprehensive Casper Star-Tribune article. The corps recently received a $20,000 donation from the Wyoming Community Foundation's Flying V Donor Advised Fund, which will be helpful in offsetting the $6,000 weekly grocery bills, $500 uniform laundry bills and $1,000 fuel bills, the article explains. Learn more about the Troopers' season on Trib.com. 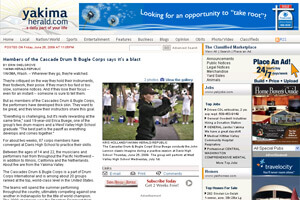 Members of the Cascades Drum & Bugle Corps say it's a blast Read about the "totally committed" and "thick-skinned" members of the Cascades in this article from the Yakima Herald of Yakima, Wash. One member, Eric Burns of Collinsville, Ill., said he will spend the next five summers with the corps because the group has "proven to be professional, committed and talented, and he's proud to be a part of it." The article mentions the enthusiasm of the corps' program director, the friendships the members are making, and their biggest challenge—cell phones. Read the article at Yakima-Herald.com 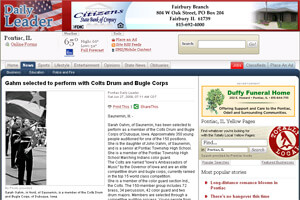 Gahm selected to perform with Colts Drum and Bugle Corps While the Colts' successes on the field are obvious, their academic achievements are not always noticed. Yet this article, about Colts member Sarah Gahm, mentions that the average GPA of a Colts member is above a 3.5 and 95 percent (compared to the National average of 43 percent) are in college or college-bound. Read this Pontiac, Ill. Daily Leader article to learn more about the corps and high school senior and color guard member Gahm. Read the article at PontiacDailyLeader.com 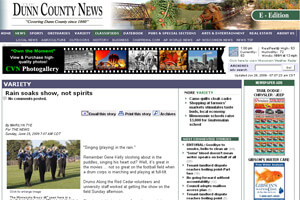 Rain soaks show, not spirits Fans stuck out the bad weather in Menomonie, Wis. for the Drums Along the Red Cedar event on June 21, featuring seven corps. Read about the corps that marched despite the rain, those that had to do standstill performances, and the dedicated fans who stayed for the whole show in this article from the Dunn County News. Read more about the competition at DunnConnect.com