Many drum corps fans know about the creation of the Midwest Combine in 1971 and how the success of the one-year organization helped pave the way for Drum Corps International the following year. What most fans don't know is the remarkable story behind the combine's first contest and the severe risk of failure that hung over one man and his willingness to stick his neck out to give the combine a chance. That man was Bob Hoehn, Sr., a drum corps fan in the Chicago area. His son, Bob Hoehn, Jr., was corps manager for the Cavaliers at the time. Bob Jr. would later go on to help found Spirit of Atlanta. 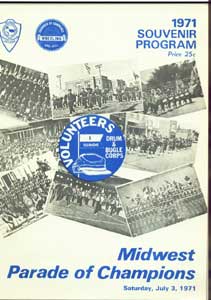