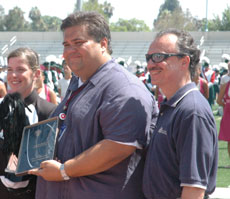 Bob Jacobs
Drum Corps International's Division II and III corps gave several special awards Saturday afternoon as the corps wrapped up their 2007 seasons. The Director of the Year and Most Improved Awards are peer-determined and are awarded to both Division II and III corps and their directors. Bob Jacobs, director of Jersey Surf, was named Division II Director of the Year. "It's an honor," Jacobs said. "I'm very grateful everyone in Divisions II and III for the support they've given me and for the ability to share ideas with them and to help to grow this aspect of Drum Corps International." Jacobs' corps, which finished second this afternoon, was also named Most Improved for the 2007 season. The award recognizes the corps that achieves the greatest improvement in on-field performance in the directors' estimation. "Certainly from last year, going from coming in seventh, to finishing second just a few tenths away from the World Championship, it's a great honor to be recognized for that," said Jacobs. "My hat is off to the staff of the Jersey Surf that worked so hard to make our weaknesses our strengths." 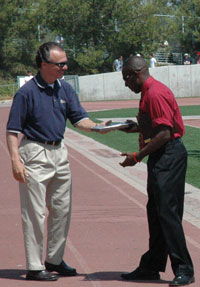 Andre Feagin
Andre Feagin of Memphis Sound was named Director of the Year in Division III. Feagin is in his first year as director for the corps. "My biggest sense of accomplishment is certainly watching the growth of the kids," said Feagin. "The sheer transformation of the ensemble and the organization inside and out – that's our greatest achievement this year." Memphis Sound won the Division III competition as well as the awards for High Brass, High Percussion, High Visual, and Best Drum Major. Feagin served not only as a first-time corps director, but also as brass caption head for the corps. "I was announced corps director in January of this year, so we haven't been together for very long," Feagin said. "But we've experienced a lot together, a lot of ups, a lot of downs, and in all, an incredible growing experience for everyone involved." Dutch Boy was given the Most Improved award for Division III. "My philosophy is baby steps and we've gotten to the point now in my sixth year as director that baby steps have now turned into large steps for the organization," said corps director Steve Meikle. "This is only the beginning for Dutch Boy; we're definitely going to climb back to the notoriety we had in the early 90s with the corps in Division I. Whether or not we make it to Division I, Division II perennial top three would be great for the corps," he said. "We've got a lot of great sponsors on board with us, and without our great sponsors and volunteer base and my great educational staff, we could not have achieved this award." Dutch Boy received the bronze medal in Division III.