Directors of corps competing in DCI's Divisions II and III cast their ballots for members and officers of their advisory committee at the recent annual meeting, held in Orlando, Fla. Additionally, the directors honored several organizations and individuals for their outstanding achievements in the past year, while also ratifying their judge administrator for another term. Elected to three-year posts on the Division II and III Advisory Committee were Charlie Groh, representing Impulse of Buena Park, Calif; Mike King of the Marion/Glory Cadets from Marion, Ohio; and Bob Jacobs executive director of the Berlin, N.J.-based Jersey Surf. Elected to a one-year term was Peter LaFlamme, director of the Nashua, N.H., Spartans. 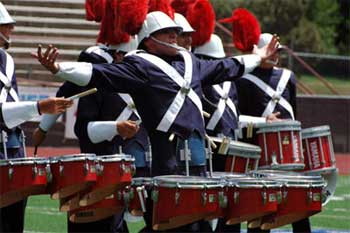 The Blue Stars of LaCrosse, Wis., were voted the most-improved Division II corps of 2004.
The newly elected committee members join currently-seated members George Brown of the Vanguard Cadets of Santa Clara, Calif; Paul Chaffee from the Racine Scouts of Racine, Wis.; and Ed Martin of Yamato, based jointly in Riverside, Calif., and Kyoto, Japan. George Brown was elected to serve another term as chairman of the advisory committee and Bob Jacobs was elected to the position of vice-chairman. John Turner was unanimously ratified to serve another term as the Division II and III judge coordinator. Turner works with the DCI office in the judge scheduling process, and is also instrumental in fielding adjudication concerns, assisting in judge education and facilitating the flow of communication as it relates to the unique needs of the units competing in these divisions. Closing out the weekend¹s festivities were presentations honoring the "Most Improved Corps" in each of the two divisions and the "Director of the Year" for both competing classes as well. The greater Portland area's Oregon Crusaders, DCI Division III World
Champion in 2004, was voted most improved in Division III by fellow corps directors, while The Blue Stars of LaCrosse, Wis., garnered the honor in Division II. Director of the Year recognition went to Sarah Teschke of Madison, Wis.,-based Capital Sound in Division III, and to Division II director Bob Jacobs of the Jersey Surf.