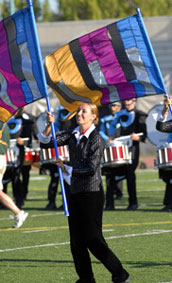 Jersey Surf
Twenty-two drum corps performed at Pasadena City College's Robinson Stadium today for the Drum Corps International World Championship Division II & III Prelims competition presented by A.J.Wright. Jersey Surf (93.750) won the Division II competition, barely edging past the Spartans (93.700) and members of Memphis Sound (90.975) won the Division III competition maintaining their lead ahead of Fever (88.025). This is the first season Jersey Surf has been on top of the prelims competition and the entire corps was very pleased with tonight's performance. They're very excited to compete in the World Championships and will continue to refine their show looking for the chance to capture their first championship title. "The show we performed today was probably the best performance of my entire life," said 21-year-old Jersey Surf mellophone player Andy Johnson. "I can't wait to see what we do in the next few days left in the season." Memphis Sound also is looking forward to the two remaining competitions as they lead the Division III crowd and possibly make their way to their first championship title as well.