Drum corps is an activity with a language all its own. Below are some key terms that corps members use to communicate with each other—and to confound "civilians." 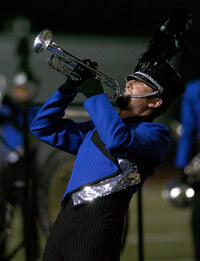 A member of the brass section, typically a trumpet player, who can play high notes with great ease.