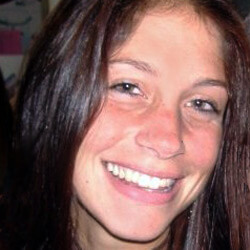 Chelsey Curran
Chelsey Curran, 19 Florida State University Glassmen Baritone, 2008-2009 How did you choose your corps? My best friend's brother marched with the Glassmen for four years. One of those years was in 2005, and I accompanied my best friend and her family to a DCI event in Orlando, Fla. that summer. Between watching the corps members rehearse the day of the show and then watching the actual performance, I knew I wanted to be part of the organization one day. My best friend ended up marching as a member of the Glassmen starting in 2006, and then I went with her to the '08 auditions and was absolutely ecstatic when I made it! In your experience, what's the best way to prepare for an audition? It's never too early to start practicing the audition music. As soon as the audition material is available, it's a good idea to try to immediately get familiar with it. There will be so much going through your head once you actually get to the audition, so you want to be comfortable and confident in your playing. It is also a good idea to have someone listen to you play the selected pieces as well. They may hear something you haven't been paying attention to, or they may have suggestions that will make your audition stronger. What can a prospective corps member expect when he/she shows up for an audition weekend? Expect a ton of people to show up for the audition weekend. Some are just there to see what the drum corps experience is about and are not entirely serious about joining a corps just yet, but most will be competing for a spot just like you. Feed off of that energy, and don't get intimidated by the quantity or the quality of people auditioning. Expect the veteran members to stand out. In my experience, they were extremely helpful in making sure I was getting through the weekend, both physically and mentally. Not only will the vets stand out, but the staff will too. Expect to be taught by a number of very intelligent staff members, both musically and visually. You will be given a lot of important information that first weekend, so soak it up. If it seems overwhelming, talk to people, especially the veteran corps members. They are living proof that marching in a drum corps is doable. The first time you auditioned, was the process different from what you expected it to be? Yes. Personally, I was expecting to walk into a room, play the audition material, and then leave without any personal contact with the staff or indication of how it went. It was the complete opposite. The staff members who listened to my audition tried to get to know me a little, which helped to calm my nerves a bit. After I played for them they gave me only positive feedback, which also made me feel a little better about the whole process. That made me more confident as I joined the rest of the corps after my one-on-one audition. Furthermore, I expected it to be more of a do-or-die music audition. The overall audition, however, was based upon my performance the entire weekend. Were you nervous at your audition? Yes, I was extremely nervous at my audition. I tend to get nervous when playing in front of people in general, but I was even more so at this audition because I wanted to be in the corps so badly. I never fully got over my nerves but like I said before, having the staff talk to me before and after my audition helped a lot. It made me feel like they truly wanted me to be there. They didn't make me feel like a number on a list of everyone auditioning or just another horn player. What do you think is most important for someone to take away from the audition experience? The audition experience is a good time to get to know people who share the same passion as you. If you make it, that's great! You'll already have something in common with the other 149 people who make it, and that will be a foundation from which good, lasting friendships can form. If you don't make it, try again next year! You'll already be familiar with how the process will go, so you can prepare for it even better. And you'll still have the opportunity to stay in touch with those who auditioned with you. Any other advice? On the plane to my first audition camp, my best friend sitting beside me could tell how nervous I was. She told me that if I showed that I am willing to work hard, and that I truly wanted to be there, everything would work out. She was absolutely right. Don't get discouraged if your music audition didn't go well, or if you're just not getting the specific marching technique yet. This might sound clich?©, but hard work and a good attitude really do go a long way, especially in a drum corps. Moreover, do NOT be afraid to ask questions. No matter how broad the question or minute the detail, those inquiries show the staff that you care about what you are doing. And lastly, have fun with it! You are auditioning for a reason; you love marching and playing your instrument. You should have a good time meeting new people and doing what you love. Learn more about corps audition dates, locations and additional info.