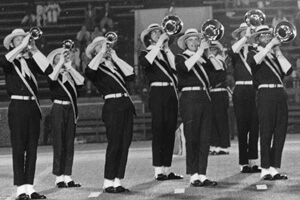 1975 Madison Scouts
It's always fun to approach a brand new project with an open book of possibilities. Welcome to DCI.org's "Download of the Week," which commences with a look back at the Madison Scouts' 1975 DCI World Championship performance. 1975 was the first year PBS broadcasted the Finals. The first three years of DCI's existence were not officially filmed for posterity, although a handful of performances from 1974 are available from DCI because an upstate New York PBS station filmed the Ithaca Finals for their own use. Unfortunately, the station recycled half of the taping for other purposes. Such was the lack of foresight back in that era. It's like NBC re-using the earliest tapes of Johnny Carson on "The Tonight Show." (Can you imagine the value to society had those first shows been saved?) I feel much the same way about the first three years of DCI's existence. No one suspected we might want a record of these events decades later, at least enough to make plans to have these shows filmed. But back to Madison Scouts 1975: The performance was so intense and the execution (what we used to call "Performance") was so deadly spot on, the corps won the Finals despite Santa Clara Vanguard earning a perfect score in all three General Effect captions. (Scouts got perfect scores in Bugle and Drum Effect, but fell 0.30 short of a perfect score in M&M (Marching and Maneuvering) Effect. And had it not been for SCV edging the corps at the DCI Midwest Regional Prelims, the Scouts would have ended up with a perfect competitive record for the year. The corps finished with a 91.50, compared to SCV's 91.00.
1975 Madison Scouts performance excerpt.

Through the speakers, one can feel the loudness of Jimmy Elvord's stellar horn line, even from behind the backfield line. In those days, the horns and drums had to start off the field, with only the guard allowed to start on the field. Yet, that horn line still shook the stadium. I'll always remember that sound. The corps was performing as my corps was getting ready to go on the field in the first ever drum corps show in which I marched, the season-opening show hosted by the Cavaliers. Even from behind the stands, the sound of that horn line drilled right through one's soul. When watching this recording, a few things may jump out at those who weren't yet born in 1975. Long hair ruled. Corps utilized only one set of flags the entire show. Drill was totally symmetrical to the 50-yard line and leg lifts were high, even during ballads. The only mallet instruments allowed were bells and xylophone and since there was no pit, those instruments had to be worn around the neck, as were the individual timpani. A timer's gun was shot off at the end of the judged execution section of the show, with only General Effect being judged until the end. And the scariest thought for me: Many of the marchers seen in this recording are probably now grandparents. The huge wall of sound in the opener of "Slaughter on Tenth Avenue" hasn't lost its luster in the intervening 35 years. It seems as if the corps had an endless supply of soprano buglers who could scream in the stratosphere. One would be forgiven to wonder why the PBS microphones were set so close to the mallet keyboards, but they would also be forgiven for wondering about the gnome that we see sitting on the front sideline during the performance. In "MacArthur Park," you get a great view of how the timpanists had to crank their individual timpani to change pitch, and "Rhapsody in Blue" (the other selection in the Scouts' 2010 show in addition to "Slaughter on Tenth Avenue") provides a glimpse of the high leg lifts that were standard even in the soft sections of shows back then. Along with "MacArthur Park" and the closer of "The Way We Were," the drum solo of "Dueling Banjos" reminds us that in DCI's early days, pop music was not something from which corps shied away. In "The Way We Were," you'll get a good view of the timer's gun going off, letting the execution judges know to stop judging. The end of the show brought back horn arranger Raymond Baumgardt's massively loud tag to both the corps' 1974 opener and closer. With the impact this horn line had on the activity, it's no wonder both Jimmy Elvord and Raymond Baumgardt ended up in the DCI Hall of Fame. The 1975 Madison Scouts are a superb reminder of DCI's origins and 35 years later, the entertainment value of this show is still at the top of the game. It's no wonder why a member of the corps that year, James Mason, decided to get back into drum corps after leading Star of Indiana to the World Championship in 1991, plus after enjoying many years of worldwide success with "Blast!" It's also no wonder why he decided (as program coordinator for the 2010 Madison Scouts) to redirect the corps into the future by paying homage to 1975 with his selection of music this past season. This week only, you can save on 1975 World Championship Audio and Video Performance Downloads on the DCI Fan Network. Buy the 1975 Madison Scouts' Video Performance Download. (Available this week only for $3.99. Regular price: $4.99.) Buy the Audio Performance Download bundle of all 12 Finalists from 1975. (Available this week only for $15.99. Regular price: $19.99.) Offer ends Monday, Jan., 17 at 8:30 a.m. ET.