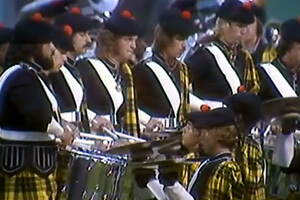 1977 Kilties
The Kilties from Racine, Wis., were a unique corps with a look and sound that was easily and instantly identifiable. The corps was a powerhouse for many years and won three VFW National Championships, in 1964, 1968 and 1969. The most obvious part of their look was what gave the corps its name, the kilts the entire corps wore. Drill-wise, the "Flying Wedge," a V-shaped form that pushed forward, was also a visual trademark of the corps. Musically, an abundance of Scottish rudiments and brass players re-creating the sound of bagpipes was quite distinctive. And, of course, was the corps' trademark song of "Auld Lang Syne." First used as a closer in 1960, the piece returned for three years in 1963 and then became ingrained in the corps' history when it returned in 1967 as a new arrangement by former corps member Ken Norman. This arrangement stuck around for 10 straight years and is the singular piece fans associate with the group. Ken Norman did more than just arrange for the corps. Frustrated with the limitations placed on horn lines by the rules of the veterans' organizations that held the largest national competitions at the time, he decided to lead the charge in changing brass lines forever. Writing in a 2000 DCI Magazine article, longtime DCI judge and DCI Hall of Fame member Dave Richards wrote, "Headed by Ken Norman, top musicians in the activity developed a G [keyed] bugle with the valve tuned in F and a rotary valve tuned in B-flat. In essence, they created an instrument that mirrored the trumpet's first and second valve and made the bugle a legitimate instrument…" This is one of the reasons why Norman was inducted into the DCI Hall of Fame in 2011. After the corps used "Auld Lang Syne" as a closer for so many years, it was surprising to many fans when the piece didn't show up in 1977. It's far less surprising when one remembers the season the corps experienced in 1976.
1977 Kilties performance excerpt.

After placing 8th at the first DCI World Championship in 1972, then placing 5th, 6th and 7th the next three years, the corps plummeted to 28th place in 1976. It was thought by some on the staff that a new direction was needed to push the corps into the future, and so in 1977, "Auld Lang Syne" was heard only in parades and when the corps played itself off the field during the finale of events. The corps blasted back into the Finals in 10th place, in part thanks to 35 members of the successful Kiltie Kadets that were sent up to the corps. An even bigger break with tradition came in 1978, when the corps came out with 18 female members in the color guard. Up through 1977, the Kilties were an all-male corps. 1978 was the last year the corps would place at the Finals. The corps' 1977 production opened up with "McDuffy's March," quite typical of the style for which the corps had been known. The march combined a number of famous Scottish themes and other melodies. Quite atypical for the corps was "Heaven On Their Minds" (from "Jesus Christ Superstar"), prominently featuring the rifle section and including a drum solo. A jazz version of "Pagliacci," inspired by Maynard Ferguson's rendition, was the concert standstill production. English rock vocalist John Miles' hit single, "Music," served as the closer, ending with the rifles doing forward somersaults, which always generated a huge audience response. This week only, you can save on 1977 World Championship Audio and Video Performance Downloads on the DCI Fan Network. Buy the 1977 Kilties Video Performance Download. (Available this week only for $3.99. Regular price: $4.99.) Buy the Audio Performance Download bundle of all 12 Finalists from 1977. (Available this week only for $15.99. Regular price: $19.99.) Offer ends Monday, Sept. 26 at 8:30 a.m. ET.